Flying with The Pilot 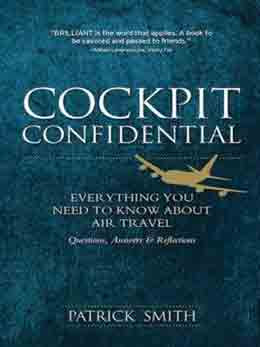 Facing the dismal prospect of a couple of trans-Atlantic flights this summer, I snapped up an audio copy of pilot Patrick Smith’s Cockpit Confidential: Everything You Need to Know About Air Travel: Questions, Answers, and Reflections soon after its May release. I’m a long time fan of Smith’s Salon articles and Ask the Pilot website. This guy explains commercial flying, its triumphs and vicissitudes, honestly and wittily like no other writer I’m aware of.

I’m not a nervous flyer -- mostly bored and slightly irritable when locked in an uncomfortable plastic tube for some hours after being prodded through officious “security” theater. But I am a San Franciscan, very aware that a commercial jet recently flunked landing at our local airport (with some loss of life). Bad stuff happens in flying, though vanishingly infrequently as Smith reminds us.

Where I feel out of sync with Smith is that he loves flying. If, like me, you experience little romance in air travel, you can hurry over the more technical sections of the book and over some of his enthusiasms. But even the most jaded of flyers can get something from his catalogue of the best vistas available to be seen from the air: as it happens, I have a vivid memory of looking down on the vastness of Greenland during a flight to Europe over the pole. The view was as remarkable as Smith says.

Where Smith’s book is delectable for a reluctant flyer like me is in his discussion of airlines (he knows most of us hate them!), airplane comfort (lousy in economy and he has a list of suggestions that could make it better like free inflight wifi for customer distraction and better seats) and the absurdity of the United State’s so-called “security” measures. Here’s a sample of what he has to say about the last:

… the security enhancements put in place following the catastrophe of September 11th, 2001, have been drastic and of two kinds: those practical and effective, and those irrational and pointless.

The first variety have taken place almost entirely behind the scenes. Comprehensive explosives scanning for checked luggage, for instance, was long overdue and is perhaps the most welcome addition. It’s the second variety, unfortunately that has come to dominate the air travel experience. I’m talking about the frisking, x-raying, body scanning and confiscating that goes on at thousands of concourse checkpoints across the globe. These procedures waste our time, waste our money, and humiliate millions of us on a daily basis. …

[This] is a strategy that looks upon every single person who flies — the old and young, fit and infirm, domestic and foreign, pilot and passenger — as a potential terrorist. That is to say, we’re searching for weapons rather than people who might actually use weapons. This is an impossible, unsustainable task in a system of such tremendous volume.  Up to two million people fly each and every day in the United States alone. Tough-as-nails prison guards cannot keep knives out of maximum security cell blocks, never mind the idea of guards trying to root out every conceivable weapon at an overcrowded terminal. …

Smith values professionalism. His critique of airlines and regulatory authorities becomes negative only when the chase after more dollars violates his sense of proper behavior in such an honorable activity as, semi-magically, taking to the air.

If you’ve been reading The Pilot for awhile, you’ll find a lot of repetition in this volume. If not, I think most people will find Smith smart and interesting about what is for most of us an irritating and alienating interlude.