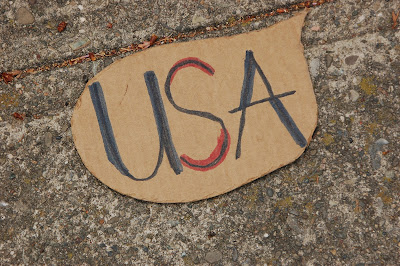 After a long weekend spent on retreat with friends who make up War Times/Tiempo de Guerras, I'm too pooped to write coherently this Monday morning.

But I'll share what I'm pondering. Stephen Walt has opined that

The only solution for Egypt that I can see is one where the contending groups agree to share the country. The competing factions will eventually have to realize that none of them can rule alone and that a political order must be devised that gives each a stake and guarantees each at least some degree of political influence. That's the only formula for successful participatory politics:

Perhaps. Certainly Egyptians need to end the pattern of the guys with the most guns shooting their way into dictatorial power. I hear on NPR this morning they are about to release the old dictator, Hosni Mubarak ... WTF?

Let's turn Walt's prescription back on our own society. How do we "share the country" with people who approve shooting black and brown teenagers for being out of their presumed place?

With people who equip local police departments with tanks?

With folks who've brought back veterans of the Iraq and Afghan wars and set them up as a Border Patrol?

The same folks are enacting legal barriers to full access to the vote wherever they can. And these same people believe they can and should dictate to women what we can do with our bodies.

How do we "share the country" with these folks without giving up on building a more equitable and more just society?
Posted by janinsanfran at 7:51 AM

Those who want to share usually only want it until they get the strength to take over. I don't see how it works but on the other hand, how do we accept rule of the majority when it means potentially taking away basic human rights? I do not believe in revolution in the violent sense as it never seems to really solve anything. Some would break our country into smaller countries who have more similar values (like Oregon, Washington, northern California and maybe part of British Columbia to be called Cascadia), but you know the federal powers would never allow it even if the majority in the whole nation wanted such division. The real hope has always been education for the future which is why it's being threatened by those who value ignorance. How do we solve Egypt's problems when we cannot solve our own?

I trust Egyptians will solve Egypt's problems. The only role for us in that is doing our best to keep our leaders from making Egypt's problems worse .. and working on our own. Or so I think.

I don't feel that I need to live in a country where everyone "shares my values" or has a "lifestyle" like mine. Or is similar to me in race, age, income, etc etc I don't care what most of the human race is up to, and I am sure most people don't care about my doings either. What I want is a government and institutions and businesses that treat people fairly and reasonable laws that everyone can abide by.