We’re not in the Spanish mountains anymore … 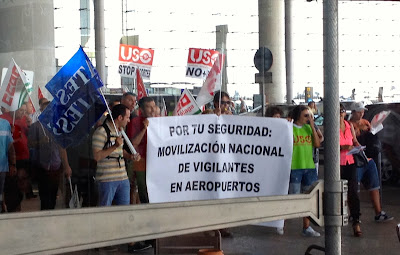 This was the scene that greeted us at Malaga International Airport as we began our journey to the States. Several union federations had banded together to protest cuts to airport security jobs -- I can't say whether we are seeing the equivalent of the TSA or airport employees generally. It was polite and peaceful but exemplary of the pain and sporadic resistance we saw all over Spain, one of the countries most hurt by the Great Recession.

Everywhere on our trip we saw the effects of Spain’s burst housing bubble: unfinished tracts; rural houses empty, but posted with “for rent” signs; stores selling off their merchandise (especially clothing) and going out of business. Everyone we talked with felt times were very bad -- and very different than they had been just a few years ago.

Economist Paul Krugman writing in the New York Times has been describing the misery that is the Spanish economic situation for several years. He argues strongly that Spain is being subjected to needless pain by (northern European) leaders that treat economic problems as a morality play, rather than a set of imbalances in the euro area that better policies could alleviate. Here’s a sample from last year:

Consider the state of affairs in Spain… Never mind talk of recession; Spain is in full-on depression, with the overall unemployment rate at 23.6 percent, comparable to America at the depths of the Great Depression, and the youth unemployment rate over 50 percent. This can’t go on — and the realization that it can’t go on is what is sending Spanish borrowing costs ever higher.

In a way, it doesn’t really matter how Spain got to this point — but for what it’s worth, the Spanish story bears no resemblance to the morality tales so popular among European officials, especially in Germany. Spain wasn’t fiscally profligate — on the eve of the crisis it had low debt and a budget surplus. Unfortunately, it also had an enormous housing bubble, a bubble made possible in large part by huge loans from German banks to their Spanish counterparts. When the bubble burst, the Spanish economy was left high and dry; Spain’s fiscal problems are a consequence of its depression, not its cause.

Spaniards we talked with about this seemed to agree with Krugman’s conclusion:

European leaders seem determined to drive their economy — and their society — off a cliff.

Certainly there was tremendous alienation; none of their own politicians inspired any hope.

The belief that economics is a morality play and that people who can’t succeed in a rigged game have only their own sins -- laziness, profligacy -- to blame attracts conservatives everywhere. Our Republicans believe this -- and so apparently does Barack Obama when he is not actively rallying the middle and working class (of whom so many are not working) to support him.

But this is bull bleep: it’s time for an update of a once popular slogan: instead of (or in addition to) Question Authority, we need to Question Austerity! Neither Spaniards nor people in the US need to experience more economic pain. We need an economic jump start from our governments, damn the expense. What’s so hard about that?
***
Weirdly, though we dutifully presented ourselves at the Malaga airport for what was supposed to be a trip to Boston by way of Zurich, that’s not where we are tonight. A cat got into the plane’s landing gear, causing a several hour delay. Incredibly, when they took it all apart, there was living cat in there. But we missed the Boston leg of our flight and find ourselves with a night in Zurich at Swiss Air’s expense. Don’t know when I’ll next be able to post.
Posted by janinsanfran at 6:00 AM