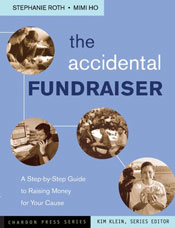 This is a shameless plug. Two friends of mine have written a how-to book about ways to raise money and I'm excited about it. Suppose you've just learned that you made the mistake of not going to the meeting and were appointed to put on your group's annual fundraising effort? Or your child's school sends a note that it will no longer provide craft project materials and you've been talking with other parents about how lousy the school board is? Or your poor parish church needs a new furnace, pronto, before everyone stops coming to sit through another sermon while freezing.

The Accidental Fundraiser: A Step-by-Step Guide to Raising Money for Your Cause is addressed to you. Stephanie Roth and Mimi Ho have provided everything you need to decide what strategy will likely work in your situation. They then provide exhaustive planning tools, work sheets, sample flyers, and good advice to get you through the job.

This isn't about the big stuff, about grants for thousands of dollars or government money that will sustain a large program or campaign. This is about fundraising at human scale, about the tips and tricks through which we dredge out $1000-5000 from networks of friends and acquaintances. Sure, on some level, we're just passing around the same five dollars. And also, we are too often compensating for the failure of governments, local as well as national, to do their job of caring for the general welfare. But though these small efforts we are also building and sustaining communities; Roth and Ho know this and celebrate it.

Even better, if you feel stuck with managing a fundraising project, doing it with Roth and Ho won't make you feel like you have entered an alien universe of nonprofit bureaucrats. They sprinkle very concrete stories from small progressive projects all through the book: you meet bike activists, anti-big box store campaigners, gay health advocates and rural organizers that you wouldn't mind knowing outside a book.

I've decided to give The Accidental Fundraiser (along with a small sum) to some of the organizations that hit me up at this season. Maybe we can have more interesting fundraisers next year.
Posted by janinsanfran at 9:19 AM

Nice. I don't see too many books on fundraising available and this is a welcome addition. This year is looks like Custom Made Wristbands are going to be pretty popular with fundraising groups.