Urban [wild]life:
Is this why we have possums? 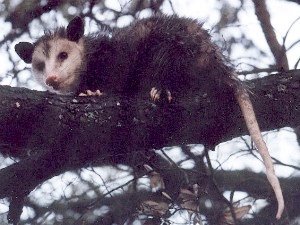 Photo by Valerie at at Garden Bits

I live in the inner city. I mean it. Friends sometimes don't want to visit here because it is a "bad neighborhood" -- not to mention a place with about 120 percent more cars than parking places. We find drunks keeled over on the sidewalks and see more drug dealing in corners than anyone wants to see.

We also have other local residents. One night last June we heard what sounded like several people running repeatedly across our roof. We called 911. Unexpectedly, two uniformed cops turned up within minutes. They shined their powerful lights on the roof and bright eyes peered back. A huge raccoon, weighing thirty five pounds at least, looked down balefully and disappeared. The officers were very nice about being called for a coon; "it happens." We saw the beast several more nights before it lumbered off.

Lately there have been roof noises again. One early evening, the woman who lives in the back went out to look up and found two (different) cops. She asked weren't they worried that a surprised, frightened, and armed homeowner might come out blasting? No answer -- someone on the block had complained of roof noises again.

About a week after that the latest source of the running sounds above became visible: we now have a family of large opossums, furry critters about twice the size of a large rat with pointed faces and long hairless pinkish tails. They are noisy too.

Why all this wildlife? I have a new theory. Across the street we have a middle school. And that middle school tries, amid the concrete, to give its students a tiny taste of cultivated greenery: 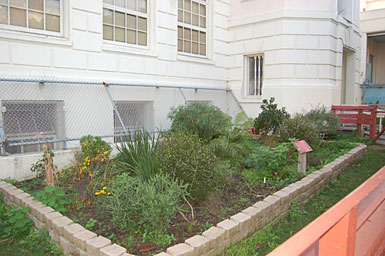 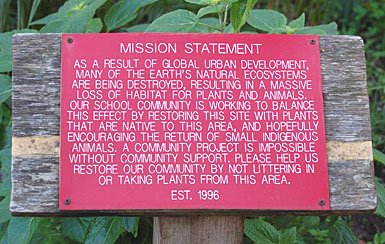 Among other worthy ends they hope to restore some balance to the neighborhood by "encouraging the return of small indigenous animals..." Can they really be attracting native critters? Or, perhaps, the coons and possums are better adapted than we imagine to inner San Francisco.
Posted by janinsanfran at 11:42 PM