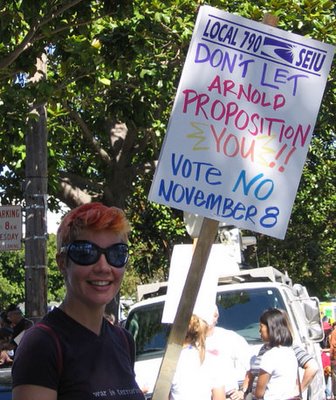 Sacramento Bee columnist Dan Walters is writing an interesting ten part series on how Governor Schwarzenegger managed to fall from being the conquering action hero of the recall election in 2003 to the goat of his own special election in 2005. The whole series is current available through this link.

Today's installment was called "Schwarzenegger's clashes with women haunted his ballot drive." According to Walters,

Arnold Schwarzenegger has a problem with women, and it has been a major factor in derailing his governorship.

No doubt about it; the Governor holds women in contempt and we sense it.

In the week before the recall election, the LA Times broke the story, long floating just below the threshold of respectable "news," that Arnold had been a serial groper of women working in the bodybuilding and movie world. The revelations were not enough to derail his momentum, but he won only 44 percent of the women's vote as compared to 52 percent of men. And a residue of slime stuck, just waiting for further evidence that the guy was no gentleman.

As Walters repeatedly suggests, a more polished politician would have worked harder to avoid triggering women's latent distrust. Arnold did the opposite. He made a promise about levels of school funding to the teachers' union -- and broke it. Not smart.

When fighting with the legislature, his idea of how to put his opponents down was to call them "girlie men." If that is an insult, it is one rooted in woman hatred, further wrapped in homophobia. Call your opponents "obstructionists," "incompetents," whatever, but don't think you can score on them by calling them female.

At a conference of the state's women, he patronized nurses who wanted him to guarantee adequate staffing in state hospitals:

An obviously irritated Schwarzenegger urged the crowd to "pay no attention to those voices over there," and added, "They are the special interests. Special interests in Sacramento don't like me because I am always kicking their butts. That is why they don't like me. And I love them anyway."

Yeah, he loves women like all the abusers love women -- it gets these guys off to kick us around.

And, so over the last year, the leading institutions of working women in California, the Teacher's Association and the Nurse's Association, cut the Gropinator down to size. I hope he understands it was those girls who did it; I suspect he does.

The night of the 2003 recall I was at a party also attended one of the founders of Code Pink, the women's anti-war group. We actually had something to celebrate as in the same election in which the voters put Arnold in, they also defeated a racial information ban. (Mixed bags, California elections.) I remember assuring her that eventually Arnold's woman hatred would come back to bite him. Even at my optimistic best, I never thought it would happen so rapidly or so clearly as it did this past November.
Posted by janinsanfran at 9:56 PM