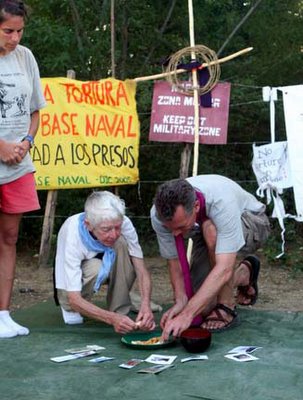 This post is an update on two sets of people who have stretched the boundaries of activism for peace -- people whose bravery has to be a challenge to all of us arm chair critics.

In Cuba, outside the U.S. base at Guantanamo: Twenty two mostly Christian activists continue a water-only fast at a Cuban military checkpoint outside the base today. The Witness Against Torture website explains:

They have completed their 5 day, 50 mile march and are now waiting for permission to enter the US base. They hope to be allowed to visit the prisoners, something that should be a simple act and one that is rooted in their religious tradition. In the Gospel of Matthew, 25:36, Christians are charged to perform the Works of Mercy. Among these works is the visitation of prisoners.

NewsDay reports that "Stacey Byington, a civilian spokeswoman for U.S. Naval Station Guantanamo Bay, told The Associated Press in an e-mail message that access to the base is limited to those with official or authorized business."

The marchers have not indicated how long they will remain outside the gates, bringing further attention to this U.S. prison in which nearly 500 men are held outside the reach of any internationally recognized legal procedures. Detainees released from Guantanamo have repeatedly claimed they were tortured. Thirty-two prisoners are on hunger strike to protest what they say is cruel and inhumane treatment. Twenty-five of those prisoners are being fed through tubes.

In Iraq: nothing has been heard for several days from the kidnappers of the four members of the Christian Peacemaker Team. The Toronto Globe and Mail reports somewhat morbidly:

The Swords of Righteousness Brigade said it would kill Canadians James Loney, 41, and Harmeet Sooden, 32, as well as long-time British peace activist Norman Kember, 74, and American Tom Fox, 54, unless all 16,000 Iraqi prisoners held in British and American military prisons are released. The first deadline was last Thursday -- 12 days after the four were abducted at gunpoint from the streets of Baghdad. The deadline was then extended until Saturday. The captors then broke off all communication --another standard tactic, which puts families through agony and places the governments of the captives' countries in a precarious position.

Many of those held hostage in Iraq are never heard from again.

The article goes on to point out that the kidnappers have gone out of their way to show the Canadian members of the foursome with free hands and able to speak, while the U.S. and British men are chained in orange jumpsuits.

In Canada:The Canadian press has been much more diligent in following this story than U.S. media. In particular, it has recounted the impression Jim Loney made on the First Nation communities in Kenora, Ontario:

Kenora activist Bobby Herrington praised Mr. Loney's inner strength. "He's right up there with a small number of native elders -- he always has that presence, that aura about him, that things can be okay."

Advent is a sacred space set aside to plumb the depth and breadth of what it means to wait and pray for peace, for reconciliation – no matter how frightening, how painful the Birth. Waiting in a Nazi cell, the Jesuit priest Alfred Delp confronts his fears and asks, "Are these hours of waiting preparation for an extraordinary Advent?"

For us, Jim's community of friends, it has already been an extraordinary Advent.

We stay awake with Jim and the others. …

Neither Jim nor Christian Peacemaker Teams is waiting for false freedom.

Neither Jim nor Christian Peacemaker Teams is waiting for some empire's shock and awe to deliver them.

Both Jim and CPT believe, as Oscar Romero put it, that "we live by that power that even death cannot overcome."

Posted by janinsanfran at 3:17 PM