A gift wins friends:
how simple can you get? 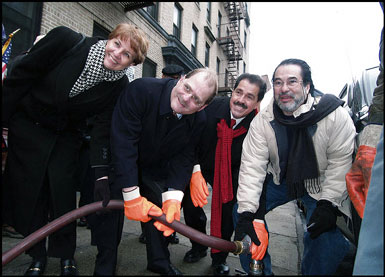 On Tuesday, Venezuelan and U.S. officials helped pump the first delivery of heating oil into a building in the Bronx. Photo Credit: By Rick Maiman -- Bloomberg News

This is just too perfect; President Hugo Chavez of Venezuela knows how to make friends. The U.S. government wants the populist leader gone, but his constituents fought off a coup attempt in 2002 and voted in a parliament to his taste just last week.

Now he is selling heating oil from his country's ample stock cheaply to nonprofits that serve poor residents in the U.S. Northeast. The gesture is popular reports the WaPo:

Moments before the orange-gloved worker snaked the hose to a Bronx tenement, Eartha Ferguson, a manager and resident of a low-income building, said: "I call it a gift of survival. It comes at a good time, a very needed time."
…
"The government should have done it," said Shirley Manuel, 52, a tenants' rights activist, wrapped up tightly in her wheelchair. "This is their country, this is their people -- they should be taking care of their own."

Rep. Jose E. Serrano (D-N.Y.), who brokered the oil deal, brushed aside suggestions that Chavez was playing petro politics. "To those who say this is to score political points," he told a shivering crowd when the first oil arrived, "I invite any American corporation that wants to score points with my community to start this afternoon."

The Venezuelan leader knows the maxim every teacher tries to impart to aspiring writers "Show, Don't Tell." If you want us to believe governments can serve the poor as well as the rich, show us.

This is not the only time I've seen a regime the U.S. government opposed woo U.S. citizens with generosity. When I visited Cuba in 1988 with a scraggly band of lefties, the Cubans offered to fix up our teeth for free, knowing full well that dental insurance was out of the question for most. The power of the gesture was less in the value of the offer itself (though for some it was a great gift) than in the recognition of our likely situation and needs in our country. We felt seen, just like Shirley Manuel.
Posted by janinsanfran at 8:53 AM