Of spying and being spied on 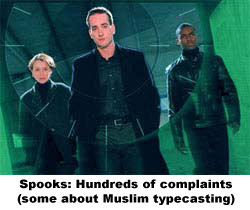 So now we're learning that federal spooks have been monitoring mosques, as well as businesses and homes of U.S. Muslims for suspicious radiation. I think John Emerson at Seeing the Forest understands this one rightly: the Bushies are leaking about this program because they know that most folks won't mind a little dubiously legal, warrantless, peeking into the secret doings of putatively brown people who practice a "foreign" religion.

The purpose of the spying is as much intimidation as information. White, middle-class people can laugh this stuff off. Muslim immigrants forced to do a turn as objects of our fears can't.

Alamdar S. Hamdani, a Texas lawyer describes how the spook work plays out among his clients:

For more than four years I have watched FBI agents pose inappropriate questions to my clients. In the name of the War on Terror, agents have questioned thousands of Muslims, often U.S. citizens, in violation of the First Amendment of the Constitution.

These agents have approached Muslims in their homes, businesses, and even places of worship, as part of intelligence gathering missions in reaction to 9/11. …For instance, because two Muslim men, both of them U.S. citizens speaking with Arab accents, complained to an apartment manager about the apartment complex's sales staff, the FBI approached the men. During the interview the agents asked about what occurred at the complex, but also attempted to ask the men which mosque they attended, who else attended that mosque, whether they prayed five times a day, what their political views were and whether they were Sunni or Shiite.

Asking such questions without a compelling reason places an impermissible "chilling effect" on First Amendment activities such as the rights to free speech or free association. In other words, agents often insinuate that because a person belongs to a particular religious group or holds a particular belief, that that person is somehow involved with terrorist groups.

Couple that suspicion with confused interviewees who speak English as a second language, and people can become afraid of attending a mosque or voicing political views. Worse yet, they are sometimes detained for simply misunderstanding a question.

Legal rights must seem a mirage to communities routinely subjected to this stuff.

Fortunately, some do find ways to laugh:

In other news, KABOBfest's team of investigative reporters have discovered that the federal government has also been surveilling the sewage pipes coming from Muslim houses. …

Read the rest here.
Posted by janinsanfran at 8:43 AM