The guy knows the ropes 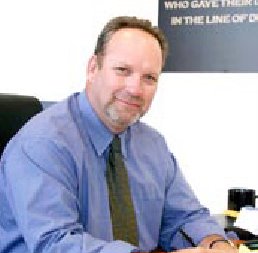 This is yet another post in which I'll bring some history to bear on current events. I see this morning that San Francisco's finest have once again been caught doing what they too often do best: spreading their racist, sexist and homophobic attitudes out for all to see. The SF Chron reports that in addition to the offensive video clips found on an officer's web site yesterday, the Christmas party film project also included scenes of "a black officer eating from a dog bowl and one of an Asian officer having difficulty riding a bicycle." Nice fun and games those SFPD boys get into out in the Bayview, San Francisco's last poor and gang-ridden Black neighborhood.

The local story broke into the NY Times which reports that, in addition admitting that video was "stupid and immature,"

Mr. [Gary] Delagnes of the [SFPD] union bemoaned the fact that "every lefty in San Francisco is going to love this."

It is not surprising that Delagnes worries over the ammunition this latest police escapade will provide to critics of the SFPD's more material faults, like occasionally shooting suspects. Before Delagnes attained his current eminence in the police union, he was at the center of quite a few shenanigans himself, racking up as many as 100 conduct complaints during his active duty career. (San Francisco doesn't adjudicate citizen complaints; it buries them in paper work, so there is no way of knowing how many of these were justified.)

His best know escapade rivaled the current brouhaha. How's this for an example of mature police conduct?

During San Francisco riots in 1992 over the Rodney King jury verdict in Los Angeles, [Police Chief Richard] Hongisto had hundreds of people jailed. In the wake of those arrests, the Bay Times gay newspaper ran a suggestive illustration of Hongisto with the headline, "Dick's Cool New Tool: Martial Law.'' Police Officer Gary Delagnes and other officers responded by grabbing more than 2,000 copies of the newspaper off news racks.

Hongisto was fired; Delagnes continued his rise in the department. He knows the guys he defends from his current perch; he has always been one of the boys.
Posted by janinsanfran at 11:43 AM

you assholes dont know gary. gary is a guy who doesnt take shit for you fucking liberals who are ruining a great city...fuck off

It's rather difficult to counter such a well expressed, thoughtful and articulate argument as the one posted above. No doubt penend by one of SF's 'finest'.