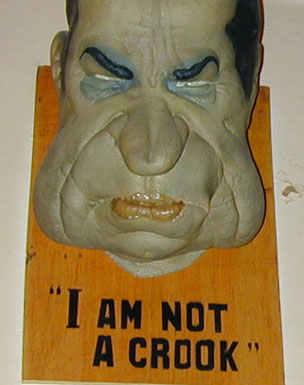 The 37th President hangs on a bar wall in Cusco, Peru.
My goodness this is moving along quickly -- the progress of our "Vietnam on steroids" experiment, I mean. Yesterday the Preznit announced that we are now deeply into the Nixonian stage, attempting victory through Iraqization. Sure, that's a nice fantasy. Reporters don't even pretend to believe this stuff:

Bush, in his speech at the U.S. Naval Academy, spoke of progress toward independence, of land restored to Iraqi control, of gains in stability and democracy, and of the "skill and courage" of newly trained Iraqi security forces.

But on the streets of Baghdad, such optimistic rhetoric contrasts sharply with the thunder of suicide bombs, the scream of ambulance sirens, the roar of racing police cars bearing men with masks and machine guns, and the grim daily reports of assassinations, murders and hostage-taking.

It took mainstream media awhile to print this obvious truth, but I guess better late than never.

Today I took part in an interesting exchange about the political implications of the current Nixonian moment in which commenters highlighted a quite specific lesson:
That is, the longstanding rightwing line that any impediment to U.S. imperial ambitions must take the form of an unpatriotic "stab in the back" just won't fly at present. A grizzled ex-Marine, Congressman Murtha, has become the face of opposition to the war.

That seems right, but, I think, points to what has been a central obstacle to building a mass, engaged antiwar movement in the Iraq invasion era: there is simply no force to support. In the Vietnam era, many opposed to the war came to support Vietnamese nationalist aspirations; in Iraq there are no good guys. Antiwar folks are left to say "a pox on all your houses" and "let them all alone." Some of the most potent symbols antiwar folks have been able to offer have been military families unhappy with the war and the bereaved Cindy Sheehan. Their work has certainly brought home the "leave them all alone" message in reference to beleaguered U.S. grunts.

Yet the kind of people who will risk disapproval (and worse) from their fellow citizens to build an antiwar movement don't want to simply be naysayers. They are precisely those among us who hang on to the hope that "another world is possible." A few of the bravest become Christian Peacemakers and risk their lives. Let us hope that those currently being held captive get out alive.

But if that sort of action is what it takes to make a potent antiwar movement, the bar is too high. Most people will never be heroes. So the antiwar movement has been left to chip away at the edges of the national consciousness, supporting little vigils and occasionally larger marches, pestering Congresspeople, advocating for more truthful media coverage of the ongoing disaster.

The current Nixonian moment seals the story; the U.S. will leave Iraq. If the Bushies are true to their trajectory (and they are far less competent than the Nixon guys), the U.S. will leave with its tail between its legs. The difference will be that people here will pay a far greater price as U.S. power and wealth cannot cushion the pain of peak oil, genuine economic competition, and climate collapse.
Posted by janinsanfran at 11:19 AM