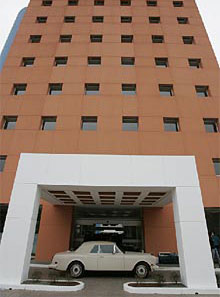 The comprehensive private care facility's opening this week in Tijuana drew VIPs, some of whom arrived in this Rolls-Royce. Photo: Jim Baird, San Diego Union-Tribune

You got to hand it to rampant capitalist entrepreneurship -- it is creative. Smart MBAs figured out they could send U.S. customer service jobs more cheaply to India. Huge success. Big pharmaceutical companies managed to keep drug prices uncompetitively high in the U.S., so Canadian pharmacies discovered they could make money selling the same drugs to U.S. consumers. Great business model. Health care costs are out of control in the U.S.; a Mexican private hospital chain thinks it can prosper by building a new facility in Tijuana and attracting U.S. patients.

The hospitals' operators are counting on drawing a significant portion of their patients – as much as 25 percent – from Southern California. They are offering care at lower cost, they say, but at standards similar to those north of the border. Hospital administrators say their services will cost about 40 percent less than comparative care at a San Diego hospital. …

"We really welcome that they come," said [Dr. Patricia] Aubanel, a heart surgeon who has worked on both sides of the border and founded a cardiovascular center in 2002 at Hospital del Prado. "It's good for the city. It puts us at another level of competition, which is always good."

Growing numbers of patients from across the United States reportedly have been going to Mexico in search of elective procedures such as gastric bypass operations and plastic surgery offered at a fraction of U.S. prices.

There have long been clinics of dubious quality in Tijuana. Maybe this outfit can give the town a better medical reputation.

Sounds to me like a new incentive for linguistically challenged Amuuricans to learn Spanish.
Posted by janinsanfran at 9:54 AM

I agree health care costs are out of control in the US. I hope something can be done to improve the health care crisis as millions lack coverage.