Off Center -- does anyone care?

Off Center: The Republican Revolution and the Erosion of American Democracy
by Jacob S. Hacker and Paul Pierson 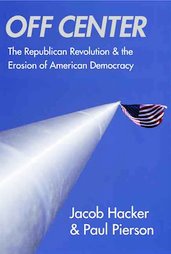 This Yale Press book is insightful, well argued, but not quite what I was looking for.

The subject is domestic politics. The elephant in the living room, U.S. wars around the world promoted through lies and waged by executive fiat, is not even in the picture.

The authors, academic political scientists, argue that, since winning the House of Representative in 1994, Republicans have overthrown the checks and balances thought to constrain U.S. politics. They have successfully enacted a rightwing agenda that ensures that the ability of government to ameliorate "free market" inequities is gone. Actual policies led by tax giveaways to the rich and new heights of unscrupulous manipulation of civic ignorance, disengagement, and prejudice have built a durable barrier to any challenge to their rule.

If you want to know how rightwingers do it, Hacker and Pierson are absolutely worth studying. They are particularly good on the parliamentary ruses, such as rogue "conference committees" and holding votes open, which enable Republican leaders to both overcome and give cover to their own centrist members.

They are perfectly clear about the right's deformation of the system in service of the wealthy:

The ballot box offers no easy cure. Money talks, the rest of us limp.

The blogger and historian Stirling Newberry has a memorable name for this system: "Representative plutocracy -- the money goes to politicians to represent it to the voters."

Having asserted and proved that the U.S. political system is broken, Hacker and Pierson's prescriptions for a fix seem weak: they suggest longer term political calculations, reform of Congressional procedures, more transparency in government. Those are all worthy projects, but a little feeble in the face of a brutal power grab by determined oligarchs.

Perhaps the weakness of their countermeasures derives from their analytical premise: this is a book about subversion of U.S. constitutional arrangements that have reined in radicalism of right and left, that once empowered "the center." What the heck is "the center?" For those who feel trapped on either side, it is looks like an unpleasant quagmire of immobility. Given that historic constraints on rightward movement have been broken, what would inspire people to take up the difficult, painful political struggle to turn the state in a new direction? Moving politics toward a mythical middle will not supply mass motivation for change.

Most people, those left of center anyway, engage with politics out of necessity, not inclination. They want the state to make sure they have a chance in life. Since the folks with money start with advantages, they want the state to balance the scales. They don't give a hoot about "the center." They don't understand why a country this rich can't do a better job of taking care of its citizens. They don't understand why the U.S. should send young people to get killed in wars that no one will explain to them. Those are the kind of motivations that change political trajectories -- I assume Hacker and Pierson know that, but one of the ways we're currently "off center" is that no one with a respectable platform is supposed to say so.
Posted by janinsanfran at 1:03 PM