U.S. propaganda in Iraq:
Who is the target? 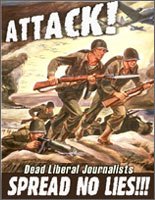 The story was broken by the LA Times a couple of days ago that U.S. tax dollars are paying a PR firm to place feel good stories in the Iraqi press. As far as I can tell, most of the commentary is missing the point. (Laura Rozen is an important exception.) What we have here is reversion to the "low intensity conflict" style of operations that predominated in U.S. overseas adventures in the 1980s.

What is "low intensity conflict"? It is certainly not "low intensity" for those on the receiving end. Rather, it is a military doctrine that recognizes that:

"The roots of insurgencies are not military in origin," [Reagan's] Secretary of the Army John Mrsh explained, "nor will they be military in resolution." Source.

When the U.S. military could not impose its will through force of arms in Central America, it turned to "total war at the grass-roots level." Death squads, destruction of civilian infrastructure, secret bombing, and spreading endless lies were the order of the day then, and have become so once again as the U.S. loses even the feeble grip it won in Iraq through Rumsfeld's invasion-lite.

The U.S. public doesn't want to sacrifice to fight an imperial war. So the Iraqis get "low intensity conflict." The U.S. public gets the psych-ops treatment. The Administration had to lie its way into the Iraq invasion; as its rationales have collapsed, it has had to more and more to adopt tactics of stealth and dissimulation to keep the war going.

Though most of the follow-up stories have failed to highlight this, the original LAT story contained the real nugget about our PR exploits, deeply buried:

U.S. law forbids the military from carrying out psychological operations or planting propaganda through American media outlets. Yet several officials said that given the globalization of media driven by the Internet and the 24-hour news cycle, the Pentagon's efforts were carried out with the knowledge that coverage in the foreign press inevitably "bleeds" into the Western media and influences coverage in U.S. news outlets.

"There is no longer any way to separate foreign media from domestic media. Those neat lines don't exist anymore," said one private contractor who does information operations work for the Pentagon.

Iraqis don't have to look to their "free press" to find out who makes their lives miserable; the target of this operation is right here among the credulous in the USofA.
Posted by janinsanfran at 11:24 AM