We can but watch and wait and pray… 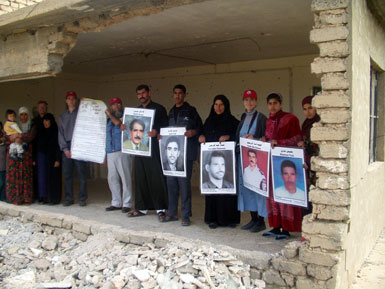 The four men, Tom Fox, Jim Loney, Hameet Sooden, and Norman Kemper, were taken as they were leaving a mosque where they had discussed what could be done to free Iraqis detained by U.S. and/or Iraqi government. There has been no known contact with their kidnappers, who call themselves the Swords of Righteousness Brigade, since December 8. Thousands of people, from all over the world, Christians, Muslims and others, have signed a petition, held vigils, and, as a step toward reducing violence in Iraq, called for an end to the occupation.

In this time of waiting, those so much closer to the situation have much to share.

Peggy Gish has served on CPT's Iraq team since before the multinational forces invaded in 2003. She is currently doing support work for the Iraq team based in Amman, Jordan from where she wrote this reflection:

It is hard for the missing CPTers' families. It is hard for us not knowing where our four colleagues are, how they are holding up during this time, or when they will be released. We pray; we cry; we wake up in the night feeling tense with worry. We ask God for more faith and trust as we call for their release and work to share the stories of who these men are, of the work of CPT in Iraq and other places of conflict and injustice. We care about these four men, yet we also feel the same urgency for all Iraqis and their families who are suffering fear and pain because their family members have disappeared or been killed or imprisoned.

Sheila Provencher works with CPT in Baghdad. She tells us:

Lately I feel so tired. There’s always a part of me that wants just to sleep; sleep and make all of THIS – the war, my government’s policies and actions, the counter-violence of the insurgency, all the greed and sin in the world – just go away for awhile. I can identify with the apathy of citizens who give in to violence: yes, just make the evil go away, press the button, fire the missile, send the young ones off to war. Take any way out.

There is no way out. But there is a way through. I tasted it the other day, when I was tired and wanted to hide, but instead went down the street to visit an Iraqi family who are going through a troubled time. On the way, I met little Huda in the street. I gave her a kiss; she gave me a piece of candy. Simple relationships, simple human connections – that’s the way through.

Brian Conley points out on Alive in Baghdad:

It is important to remember that kidnapping is a much larger problem for Iraqis than for Foreigners. ... A report by my friend Greg Rollins (also a Peacemaker) quoted an Iraqi Policeman in Baghdad suggesting that as many as 300 kidnappings of Iraqis had occurred in 2005 in his district alone! This 300 kidnappings in one police district accounts only for those kidnappings that were reported.

Amidst the agony of waiting and hoping, one of the interesting issues that has arisen from the CPT hostage situation in Iraq is the contrast between how different sections of media (and the communities behind them) have responded to the story. Even though Christian Peacemaker Teams were on to prisoner abuse and Abu Ghraib before anyone else, the mainstream continues to ignore such groups, except when a crisis erupts.

Here in the UK, Christianity is most often only good for a story when it is being silly, when it is declining, when it is fretting about sex, or when its hierarchs are being obnoxious or clueless. The routinely extraordinary things done by groups like CPT are simply "not news" -- even when they clearly are. They just don't fit "the script".

The church media isn't much better. Indeed it is often confused and baffled by people who think that Christian faith is about life transformation rather than churchianity or my-personal-Saviour. A deep commitment to the way of Christ that involves a refusal of violence, the embracing (rather than the haughty rejection) of 'the other', and so on, is for an eccentric minority.

In my travels I have noticed people do not immediately distinguish between state supported terror and terror that may grow out of groups remotely affiliated with state power or clearly independent. The use of terror in the support of military objectives has been associated with war for 5000 years. Roman legions, Genghis Khan and their predecessors including Alexander the Great resorted to wanton destruction of property, rape, and pillaging of civilian populations in their campaigns to conquer and subdue the enemy. …

In the so called Christian west there are modern efforts to bring boundaries to war by enlightenment internationalists and the inheritors of just war thinking. Various covenants and protocols are in place that prescribe treatment of detainees and guidelines on the treatment of civilians for armies of occupation. In the wake of this growing body of international law and the recovery of enemy loving teachings among Christians, governments have resorted to two track war making.

The public face of war making are the uniformed soldiers with their attendant weapons of modern warfare including all kinds of high tech equipment often justified as being inherently less destructive. The other track, the shadow side, contains war making at much more vicious level that can be regarded as the application of terror on enemy populations including civilians. Many of us choose to see the visible expressions of the security state, the uniformed soldier, but are mystified by or choose not to believe that "civilized" nations Christian, Muslim or Jewish, practice assassination, torture, destruction of whole cities with dimly lit underworld programs.

Despite the fact that thoughtful military historians report that these expressions of terror rarely achieve the desired ends of national security, planners and politicians continue to use these means.

Read the rest of it; it is worth the effort.

And so this Advent, we wait and pray for the CPT hostages and their captors, hoping that somehow our very broken world might find the joy that is also hidden among us.
Posted by janinsanfran at 10:33 PM

Just more proof of who the real terrorists are in this war.