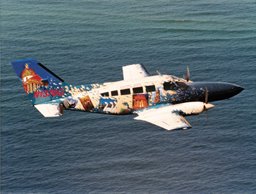 The regional carrier Cape Air is proud of its painted planes.

My own travails with the Transportation Security Agency seem to be over. I fly these days with no more hassle than any other traveler who is white and U.S. born. And we learn today that the TSA is going to change its strategy for smoking out "terrorists," adding more random pat downs and permitting nail files on flights. Just maybe some of the more irrational aspects of our airline "security" panic are receding.

Nice -- but these changes don't address the "no-fly list," that apparently arbitrary, and still secret, roster of those someone in government wants to subject to special scrutiny or prevent from flying. For the last several months, an Irish-born Cape Air commercial pilot, Robert Gray, has been barred from doing his job because, according to the Cape Cod Times, the TSA says he is a "threat to aviation or national security." The agency refused to state why. Gray sued the TSA, not surprisingly. "Court documents appear to validate his claim of never having supported any 'terrorist or other illegal activity'; in fact, Gray has never been arrested, nor has he had any prior involvement with the criminal justice system." The ACLU is trying to settle the case out of court.

The government would probably be wise to settle. Here's what Bruce Schneier, who The Economist calls a "security guru," a member of the government's own Secure Flight Working Group on Privacy and Security, has to say about these lists:

The truth is, nobody knows. The lists come from the Terrorist Screening Database, a hodgepodge compiled in haste from a variety of sources, with no clear rules about who should be on it or how to get off it. …

The program has been a complete failure, resulting in exactly zero terrorists caught. And even worse, thousands (or more) have been denied the ability to fly, even though they've done nothing wrong.

If that sounds harsh, Schneier is even tougher on programs which would pre-clear some travelers, for a price, to fly without much scrutiny. He claims that creating any loopholes will simply give a smart terrorist a new way to slip through a crack:

It may be counterintuitive, but we are all safer if enhanced screening is truly random, and not based on an error-filled database or a cursory background check….

Exactly two things have made airline travel safer since 9/11: reinforcement of cockpit doors, and passengers who now know that they may have to fight back. Everything else -- Secure Flight and Trusted Traveler included -- is security theater. We would all be a lot safer if, instead, we implemented enhanced baggage security -- both ensuring that a passenger's bags don't fly unless he does, and explosives screening for all baggage -- as well as background checks and increased screening for airport employees.

Then we could take all the money we save and apply it to intelligence, investigation and emergency response. These are security measures that pay dividends regardless of what the terrorists are planning next, whether it's the movie plot threat of the moment, or something entirely different.

Maybe as panic recedes we can also re-examine our rush to "profile" the potential terrorists. As Schneier says, racial, ethnic, and religious profiles simply encourage anyone who seriously aims to do harm to recruit against conventional stereotypes.

UPDATE: January 24. 2006 -- According to the Cape Times, "Robert W.G.M. Gray, the Irish-born Cape Air pilot who sued the federal government to get off its no-fly list, could return to the cockpit as soon as tomorrow, according to an airline representative....What persuaded federal officials to remove Gray from the list remains a mystery, as do the specific reasons he was initially considered a security threat."

Why am I not reassured about the state of our civil liberties?
Posted by janinsanfran at 8:31 PM