Changes in the 'hood 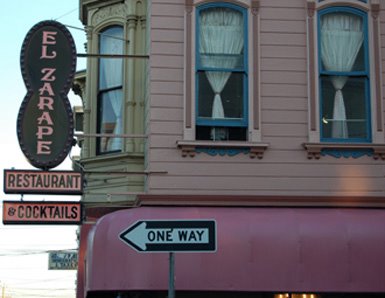 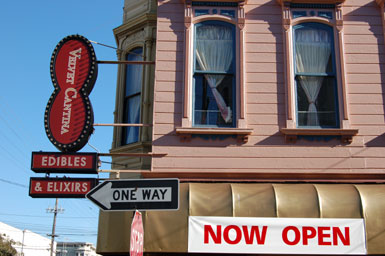 Somehow I don't think this transformation is going to make much difference.

For the last couple of months, major renovations have been going on inside the dive down the street from my house. The old El Zarape had been on this corner for at least as long as I have been here -- well over 10 years. I don't remember ever seeing more than two tables occupied out of eighteen or so. If fact, I often wondered if the place were some kind of money-laundering front.

The "now open" Velvet Cantena appears designed to appeal to a similar prospective clientele: members of the Latino business class making a night out. I just don't think there is much of a market for such a restaurant in this neighborhood.

Despite encroaching gentrification accompanied by rising property values and higher rents, this part of the San Francisco Mission District is still heavily Latino. But Spanish speakers here are mostly new immigrants, Mexican men who shape up on the sidewalks and Central American families crowded into rooming houses. Prosperous Latinos, often business owners, move their families to the inner suburbs where the schools are better and the living more secure. They may still work in the neighborhood, but they don't live here and I doubt if they'll play here.

For one thing, the Velvet Cantena can't provide parking.

It will be interesting to see whether this place endures or the new operators sell out to restaurateurs who will cater to the young white Mission crowd that travels by public transportation and eats out frequently. That's who one sees in restaurants around here.
Posted by janinsanfran at 9:46 PM