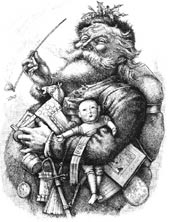 The Washington Post online has a Politics Trivia poll this morning asking:

"As of Dec. 21, how many governors had opted for more traditional Christmas greetings, such as 'Merry Christmas,' instead of generic 'Happy Holidays' greetings in their annual greeting cards?

I don't think I've ever gotten a Christmas card from a Governor; I guess that is not surprising as I don't much truck with Governors. My mother used to get cards from Ronald Reagan; she put them on the mantle (and sometimes I covered Ron and Nancy with other cards.)

Two points: Oh yeah, the answer to the Wapo's quiz (sorry, can't figure out how to link to the question rather than the results): "An in-depth Stateline.org survey concluded that 37 of the nation's 50 governors chose the more generic "holidays" formula, nine went for the more traditional Christmas greetings and four haven't sent official cards at all."
Posted by janinsanfran at 8:00 AM