Left of center comes out to vote 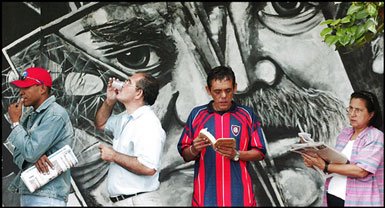 A line forms at a polling place in Caracas, Venezuela. Photo Credit: By Howard Yanes -- Reuters

Major U.S. newspaper were full of stories today about what happens when an aroused people decide they want more than just a return to the center.

[I]n the city's poor neighborhoods, where Chavez enjoys broad support, … lines of voters remained throughout the day at the high school where Chavez later cast his vote, many of them dressed in red, a color that has become a symbol of support for his government. Voters there said they believe the election was fair and dismissed the [opposition] boycott as a failed stunt to avoid embarrassing losses.

The NYT also reported on the collapse of the right wing parties:

"Chávez would have annihilated them [even if they had not boycotted,]" Alberto Garrido, a critic of the government and an author of several books about the president, said by phone from Caracas. "… There are people in the opposition, but the opposition leadership is in tumult, without a strategy. Tomorrow, Monday, they will not know what to do."

With polls indicating that government candidates would crush them in the election, opposition leaders had for weeks threatened to pull out. They accused electoral authorities of using digital fingerprint machines at polling sites that would permit the government to determine how individuals had voted. Last Monday, in a decision brokered by the Organization of American States, the National Electoral Council announced that it would not use the machines.

But to the surprise of election monitors, opposition parties began announcing their withdrawal on Tuesday,…

"The main objection was the digital fingerprint machine, which was removed, and now their line is we don' t trust the system, there must be another trick there," said José Miguel Vivanco, the Americas director of Human Rights Watch, which has been harshly critical of Mr. Chávez.

"It's really hard to understand what exactly the political opposition leadership has in mind," he said. "But certainly it is not going to help them to present themselves as victims that deserve solidarity from the international community. With these kinds of tactics I don't think they'll gain any ground."

Now I'm not going to claim to know anything deep about Venezuela. Chávez may very well be a demagogue of the first order, but clearly a majority of the people think his populism gives them a better deal than the opposition so applauded by the U.S. Because Venezuela has oil wealth, there is some surplus which Chávez can use to improve the condition of the poor majority. What else is a government for?
Posted by janinsanfran at 9:56 PM