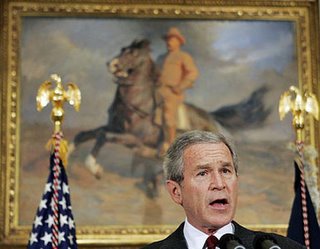 "The president does not get to pick and choose which laws he wants to follow. He is a president, not a king," said Senator Russell D. Feingold (D-Wis).

A confession: I was very much a radical activist in the 1970s, the last time U.S. intelligence services were revealed to be spying on U.S. citizens who were not charged with any crime. And I paid no attention at the time to the reforms that led to the rules and procedures, the warrants and the F.I.S.A. court, that President GWB apparently has illegally trashed.

You see, I didn't believe that laws would restrain the behavior of the FBI or other government agencies, regardless of what statutes and courts might dictate. In my short experience, local Red Squads routinely infiltrated activist groups and Chicago police had brazenly executed sleeping members of the Black Panthers (Fred Hampton, 1969). Extrajudicial repression was a fact of life for activists of color and sporadic, but real, for white leftists. The authorities could pretty much do whatever they wanted to Commies and other uppity people and there was very little recourse.

Despite the 1970s reforms, extrajudicial spying was very much a part of the U.S. government response to the citizen movements in the 1980s that supported the various peoples' struggles in Central America. Christian activists offered sanctuary to victims of the U.S. supported governments in El Salvador and Guatemala; their offices were repeatedly broken into, files stolen and meetings infiltrated. It eventually came out that the Reagan Administration had avoided Congressional oversight of their secret war on Nicaragua by selling arms to their enemies in Iran and using the proceeds to arm their proxies.

Given the long history of U.S. government lawbreaking, what makes current revelations that Bush simply trashed the laws governing spying on U.S. citizens so shocking? We're living the difference between furtive lawbreaking and a fundamental disdain for law. The LA Times asked law professor William C. Banks, director of Syracuse University's Institute for National Security and Counterterrorism, whether Bush's assurances that his lawyers reviewed the warrantless wiretaps was reassuring:

"That review is nice. But what are the standards? What are they measuring against? Some concept of executive power not written down anywhere? Not endorsed by any court? It is what you want it to be" Banks answered.

What Bush wants it to be.

It was a good run, this United States of America with its Constitution and its Bill of Rights. How sad that a gang of unscrupulous criminals has been allowed to subvert its basic values altogether. …And why? Because of a single attack by a few hijackers from a small terrorist organization?

After ignoring and doubting those old documents for so much of my life, it feels strange to realize that now I have to struggle to re-establish their authority. But I am not ready crown a king.
Posted by janinsanfran at 11:02 PM