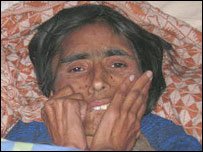 First, death: A Dallas TV station reports that a Plano hospital gave the family of a patient an ultimatum: find other care for her in 10 days or have her respirator disconnected.

Tirhas Habtegiris was an East African immigrant and only 27 when she died Monday afternoon.

She'd been on a respirator at Baylor Regional Medical Center at Plano for 25 days. …

[H]er brother Daniel Salvi was stunned to get [a] hand-delivered notice invoking a complicated and rarely used Texas law where a doctor is "not obligated to continue" medical treatment "medically inappropriate" when care is not beneficial. ... [O]n the 11th day, Tirhas Habtegiris was taken off the respirator and died.

Even though her body was being ravaged by cancer, this family says Tirhas still responded and was conscious. She was waiting one person.

"She wanted to get her mom over here or to get to her mom so she could die in her mom's arms," says her cousin Meri Tesfay. Ten days was not enough time, [family members] say, to get a mother from Africa to America.

"A fund issue is what I understand. Because she is not insured and that was the major reason the way I understood it," Salvi said.

George W. Bush signed the law that made this denial of care legal, so it is tempting to blame him and/or the peculiar barbarism of freewheeling Texan capitalism. However I would not be surprised if many U.S. states have similar laws.

Life: According to the BBC Naqsha Bibi was recovered from under the rubble of her home in Kashmir on December 10. She had survived since the October earthquake crushed into a tiny space in what had been her kitchen. Apparently a trickle of water kept her alive, though she weighed less than 75 pounds when pulled out. She was found by accident.

"We started clearing the debris of her house on 10 December, mainly to pull the iron sheets off the collapsed roof to build ourselves a shelter," says Faiz Din. … "We first thought she was dead but she opened her eyes as we were pulling her out."

Although her muscles remain frozen in a fetal crouch, doctors in Muzaffarabad believe that with liquid feeding and physical therapy, she will be able to recover.

Dr Abdul Hamid was one of the doctors treating Naqsha. When asked how someone could possibly survive for such a long time, he said, "medical science may struggle to accept it but there are miracles in this world, you know."

Posted by janinsanfran at 5:17 PM