Does it matter when we do what we say we don't do? 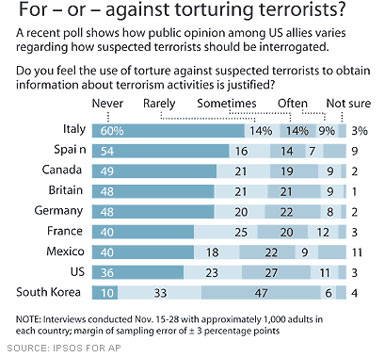 I may be naïve, but I sure hope it matters. Today the Senate, via Senator Lindsay Graham's legal dodge and good dose of obfuscation seems likely to pass a gutted version of the McCain amendment that will put the U.S. on record as "not doing torture" while in fact preventing persons tortured by the U.S. from going to court to complain about it. There's a Catch 22.

For weeks we've been treated to the Prez and Condi telling all and sundry "we do not torture." And concurrently we have the drip, drip, drip revelations that the U.S. both turns over unlucky "rendered" prisoners to others to torture and practices "harsh interrogation" tactics that sometimes leave dead bodies lying around. And many of us with longer memories know the U.S. trained thousands of Latin American torturers at the "School of the Americas" in the 80s (that military outfit is still on mission today, renamed the "Western Hemisphere Institute for Security Cooperation.")

We live with a strange, divided consciousness. On the one hand, anyone listening at all knows that our government is violating international norms and laws. Concurrently, the torturing authorities still need to lie about it, volubly, and even go through complicated charades like the current McCain amendment shenanigans to backstop the lies and give legal cover for continuing to torture.

Why bother with the lies? Why not just come out and nakedly assert: "We can and we will. Fuck you." While I am sure this is closer to GWB's preferred style (and is the style his U.N. enforcer John Bolton), they apparently can't quite do that.

I guess they do still need some international cooperation. Other governments may envy the U.S.'s freedom to act lawlessly, but at least the European ones can't afford to admit that to their own populations.

And they are hampered by a surprisingly strong residue of respect for rights and laws among people who work for the U.S. government. Today's report that the President, on his say-so, threw out the constitutional requirement for warrants to wiretap U.S. citizens betrays that many high ranking officials had reservations. They talked to each other. They leaked. The new conduct bothered them; they were accustomed to feel governed and sustained by law; they also feared they might someday suffer consequences for trashing the law.

A senior government official recalled that he was taken aback when he first learned of the operation. "My first reaction was, 'We're doing what?' " he said. … Some agency officials wanted nothing to do with the program, apparently fearful of participating in an illegal operation, a former senior Bush administration official said. Before the 2004 election, the official said, some N.S.A. personnel worried that the program might come under scrutiny by Congressional or criminal investigators if Senator John Kerry, the Democratic nominee, was elected president.

Nobody is talking high principle here, but at least there seems to have been a habit of deference to law.

I think the strength of that deference is part of why they need to torture and imprison lawlessly. It is not just the bodies of the captives that are on the line, but also the whole edifice of moral and legal constraint on the guys with the most war toys. They want that broken, definitively.

Even as the U.S. sinks more and more deeply into the authoritarian pit, I find it hard to believe that lawlessness will completely win out.

One of the mysteries of twentieth century history is that vicious, murdering governments again and again held the bodies of their most effective enemies in their control -- and didn't kill them. Nicaragua's Anastasio Somoza was a brutal dictator who responded to popular unrest by bombing his own cities. But though he tortured and imprisoned his enemies, the Sandinistas leadership survived to overthrow him. (And be "destabilized" in turn by the U.S.) The apartheid government of South Africa tortured Steve Biko and many others to death. They imprisoned Nelson Mandela for 27 years, but he lived to negotiate a relatively peaceful transition to democratic rule by the majority. Some vestige of legal constraint limited even these brutes.

Slowly, unevenly, a majority of this dangerous species of ours seems to have learned that some limits on our murderous tendencies are needed for survival. And so, prudentially, we begin to codify limits. International law gets enunciated, even if it is mostly ignored.

After storms of lawlessness, those once all powerful may be surprised to find themselves reviled -- think Pinochet. And though it may be hard for people in the U.S. to see, Eurocentrics that we are, even the loathsome Taliban were originally hailed in Afghanistan as the restorers of law; it looks likely the young Sadr may get to play that role in Iraq once the U.S. retreats.

The drive toward some rule of law seems to be universal. (What form of law remains to be struggled over, of course.) So our lawless government has to lie about torture and tries to get as many as possible to participate in the falsehood. Though not yet challenged, they know some kind of guilt, some sense of crossing a necessary line. The rest of us are left to build from that weak, but real, foundation.
Posted by janinsanfran at 10:50 AM