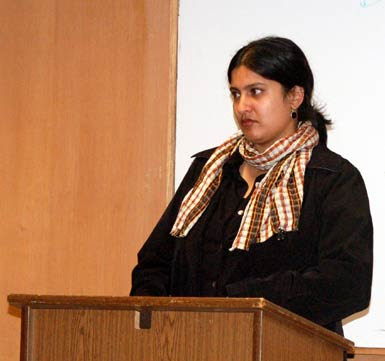 With President Obama gearing up to make the U.S. war in Afghanistan "his war," it looks like we've got to do this again: tonight I attended a small "teach-in" about Afghanistan put on by the Berkeley Stop the War Coalition.

When President Bush went haring off in 2003 on his mission to rid the world of Saddam Hussein and grab Iraq's oil reserves, most of the U.S. peace movement went right along with him, taking our eyes off the mess we'd made in Afghanistan. It was tempting to do so -- Afghanistan was even more foreign and incomprehensible than Iraq. The place really had harbored Bin Laden, and far too many of our fellow citizens thought we had a right to take our revenge for 9/11 there. And Afghanistan became, out of necessity, the one area where Bush practiced a kind of multilateralism, bringing in NATO forces to replace the army that moved on to Iraq. So we looked away.

Now the peace movement will have to make up for its inattention. In all likelihood some combination of Afghan resistance, cost in a time of economic hardship, and regional power politics will eventually drive the U.S. from Afghanistan, just as similar forces are driving the U.S. from Iraq. But in this country, as we have in relation to Iraq, we must develop a peace constituency that keeps reminding our rulers that we want our occupations ended. We may not be able to force their hand, but we remain an important irritant in the gears of empire.

And so, it's time to educate ourselves about Afghanistan. There's a lot to learn. Tonight's speaker, Sonali Kolhatkar, of radio station KPFK's "Uprising," described the 30 years war that has washed over this remote central Asian country. Russians, Afghan Communists, U.S.-, Saudi-, and Pakistani-funded mujahedeen, drug lords, war lords, tribal militias, the Islamic fundamentalist Taliban, the U.S. Army, and NATO troops have all fought their way through its villages and towns since 1979. There's not much left to blow up, but there are still 32 million people trying to stay alive.

Kolhatkar draws hope from Afghan women, victims of the horrors that war has inflicted on their society, but also political actors who are demanding peace and security. In the book she co-authored with James Ingalls, Bleeding Afghanistan, she urges us not to stereotype these women. They are tough survivors. She asked us to learn the story of Malalai Joya, who spoke out against warlords while serving in parliament, about the Afghan Women's Mission, and to support Revolutionary Association of the Women of Afghanistan (RAWA). That last organization has a clear position on the war for the U.S. peace movement to ponder:

Neither the U.S., nor Jihadis and Taliban! Long Live the Struggle of Independent and Democratic forces of Afghanistan!

The existence of strong Afghan women's organizations, however much pushed off stage by decades of war, should give the U.S. peace movement somewhere to stand in opposing prolonged and escalated U.S. occupation there. One of the struggles of the peace movement since 9/11 has been that the indigenous forces fighting the U.S. in the countries we invaded were not anyone we wanted to support. The enemy of our enemy (our own country's imperial ambitions) couldn't be our friend. But Afghan women who want a peaceful country back are a force the U.S. peace movement can unequivocally support.

We have work to do.

Posted by janinsanfran at 10:51 PM