Ask the Prez your questions 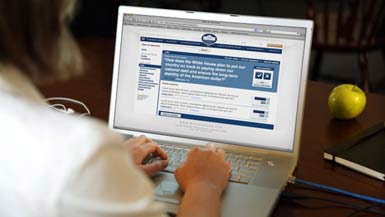 Hey, she's using a Mac in this White House photo.

I don't know whether this does any good, but it is fun. I've just been over at the White House website throwing some questions into a frothing mix of citizen opinion about the economy. The "Open for Questions" link will accept queries until 9:30 am EDT Thursday, March 27. At 11:30 am tomorrow, the President will answer some. Here are the ones I submitted:

Financial Stability
"There used to be a notion called "usury" -- the immoral practice of charging (excessive) interest. Why are there no current legal limits on what credit card companies and lenders can charge? How about passing some?"

Health Care Reform
"I have a friend who is often hospitalized for chronic illness: AIDS and Crones. Then he is put out on the street with prescriptions but not the meds he needs. He ends up re-hospitalized. Can you cut out these bureaucratic screw ups? Death comes next."

As we saw during the transition when the Obama folks did a similar experiment, the marijuana legalization folks are out in force. I've seen that in real world organizations too. Many of us, though sympathetic, do have other issues.

Who knows, you may have a better shot at getting answered than all those big shot newspaper reporters who are so peeved that Obama didn't call on them last night. They are annoyed that he called on no-count outfits like "Ebony magazine, Stars and Stripes, Univision, and Agence France-Presse." The dude is good at the small changes we need. Big ones will be harder.

Posted by janinsanfran at 12:32 PM

Two days ago Bernie Sanders, Senator from Vermont introduced a single-payer bill. Learned about it from email sent by PNHP. Still nothing in mainstream media, not even blogs (Google is my source).

Jan, thanks for telling Obama once again. Personally I'm kinda tired of administration PR efforts. Though think he is doing "the possible," would like some more action on issues you speak to.

well, it is on my blog! how did i leave that out?