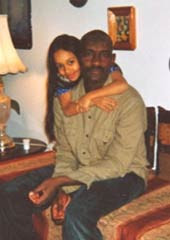 Abousfian Abdelrazik, a naturalized Canadian citizen, has been stranded in the Sudan for six years. He has been convicted of no crime. The Royal Canadian Mounted Police has said there is no information linking him to any crime. He is living in the weight room of the Canadian embassy in Khartoum.

What's his problem? The United States has him on a "no fly list" as a terrorist suspect.

Now a group of Canadians have raised enough money to purchase a ticket for Abdelrazik to fly home. Supporters include a former Conservative Party notable, David Orchard, as well as the (liberal in U.S. parlance) New Democratic Party foreign affairs specialist Paul Dewar. Ordinary citizen donors include peace activist James Loney who was kidnapped in Baghdad three years ago when there with the Christian Peacemaker Teams.

In theory, the Canadian government could charge the donors with aiding a terrorist. The Toronto Star reports:

Abdelrazik, 47, who has been holed up at the embassy in Khartoum for nearly a year, alleges he was tortured during his imprisonment in a Sudanese jail.

"We've lent our name to the use of torture against ... a Canadian citizen in Sudan and I'm very, very much opposed to that," said Orchard, who didn't know he could face jail time when he made the contribution. ...

Orchard and Wilf Ruland of Dundas, Ont. each donated $400, the largest contributions.

"There is risk (of imprisonment), I've talked about it with my wife and we agreed that something like this can't go unchallenged," Ruland, a scientist, said in an interview.

Previous posts on the Abdelrazik story here and here.

Posted by janinsanfran at 1:45 PM

The "no Fly list" is outrageous. I just read that there are over 1,000 names on it. Anyone's name could end up on this list with no explanation or justification.

Are we living in a Democracy or a Totalitarian country? I hope this is one of the Bush fiascoes that Obama quashes.

What a lovely act of civil disobedience - buying a plane ticket.