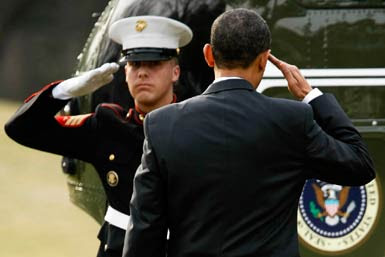 Mark Danner writes in the New York Review of Books about the leaked report of the International Committee of the Red Cross that describes in chilling detail how the United States under the Bush regime tortured 14 captured Islamist detainees. He says:

Extensive leaks to the press, from both officials supportive of and critical of the "alternative set of procedures," undermined what was supposed to be a highly secret program; those leaks, in large part a product of the great controversy the program provoked within the national security bureaucracy, eventually helped make it unsustainable.

Yes, we have another President who says "we do not torture" -- but we've heard that before. We've also seen a series of statements from the new administration that claim to back off Bush-era atrocities: there's an intent to close Guantanamo, a promise not to eviscerate laws duly passed by Congress with "signing statements," a promise of government transparency. Yet next to the nice words, the Obama regime maintains the U.S. "dark prison" at Bagram in Afghanistan, issues its own signing statements expressing an intent to buck Congressional mandates, and relies on a "state secrets" privilege to prevent judicial inquiries into the lawless rendition program that snatches up suspects around the globe and sometimes consigns them to torture.

After a couple of months, a pattern has emerged in Obama's actions: we are offered cosmetic reforms in Glenn Greenwald's excellent phrase followed by functional continuation of law-free executive power. Those of us who believe that this country should be a constitutional system of laws, not an executive monarch, still have our work cut out for us -- and this ruler is a better salesman than the last one.

The root of this assertion of unlimited extralegal executive power is that the Obama administration has adopted the same false premise that the Bush regime offered after 9/11: that the United States is "at war." What we are living is not a war. In 2001 we suffered a terrible crime -- and we made the choice to use the blunt instrument that came easily to hand and crush somebody with our bloated military. That power proved only capable of destruction, first in Afghanistan and then in Iraq. Reconstruction proved beyond its capacities.

And though many of our troops and vast numbers of Iraqis and Afghans were maimed and died, the results were still not "wars" in any meaningful sense. A war -- especially one with any pretense to be called "just" -- is a life and death struggle between states and (in the modern era) their peoples. No terrorist threat actually endangered the ongoing life of the United States in 2001 -- none endangers it today. Even a nuclear attack in a U.S. city wouldn't endanger the country's continued existence. What we face is a technologically sophisticated international criminal gang, not a war.

The Obama administration probably actually knows that. It certainly knows that the wars it inherited from Bush are losing propositions. U.S. politics, including our society's pervasive acquiescence in macho militarism, will make it hard for Obama to resist being a "War President". He has sent that extra 17,000 troops to Afghanistan and he'll likely send more, even though most other countries involved and our own smartest intelligence services and think tanks doubt there's "a victory" to be won with more soldiers.

The "war" that isn't a war threatens to deform and overwhelm Obama's administration as surely as it brought low his unlamented predecessor. Unless he can extricate the country from its belligerent occupations and its fixation on military dominance, his domestic initiatives will be frustrated and subsumed in vainly trying to project a waning power.

So far, we see yet another individual in office who feels the need to exercise law-free power as a War President.

Posted by janinsanfran at 10:12 PM