There are still women in Afghanistan 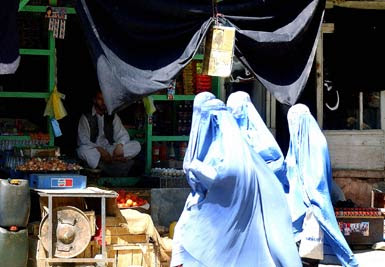 United Nations -- To mark International Women’s Day, women across Afghanistan will come together for a Prayer for Peace with Justice. The gatherings will take place at 10:00 a.m., 8 March throughout the country in Kandahar, Bamyan, Kabul, Herat, Mazar, Daikundi and Jalalabad. At the gatherings, the women will wear scarves whose blue colour matches that of the burka, the garment widely regarded as a symbol of women’s oppression under the Taliban regime.

"The women in Afghanistan deliberately chose this colour to call attention to the need to look beyond the burka toward a future where women's contribution to society is fully acknowledged," says Wenny Kusuma, UNIFEM country director in Afghanistan.

"The situation for women in Afghanistan is very mixed. There are a lot of achievements to point to institutionally, such as the Constitution, which stipulates gender equality, but the situation on the ground is not matched by the progress on paper," she adds. “In particular, we see with ever-growing concern a return to a public acceptance of violence against women that is not addressed with the legal means in existence." It is estimated that more than 87 percent of women in Afghanistan are subjected to domestic violence.

Hardly anyone in the United States except a few wild-eyed feminists was worrying about Afghan women before we paid our pet warlords to knock off the Taliban in 2001. Now Afghanistan is well on its way to becoming Obama's quagmire, full of angry civilians we've been bombing, reluctant allied troops from NATO, and corrupt local bureaucracies. The situation is FUBAR -- fouled up beyond all resolution.

Under George W. Bush, concern for Afghanistan's women was sometimes trotted out as a justification for our ongoing military adventure in Central Asia. Since our presence there seemed to consist of killing people and wondering why we weren't liked, this seemed more self-serving than anything else.

For people in the United States, Afghan women's situation should force us to think long and hard about the meaning of both international human rights and of solidarity in a world where our country's habit of throwing its military might around is one of the central problems. We do know terrible crimes are being committed . The Taliban's treatment of Afghan women -- denying them education, medical care, even the right to make a living -- was criminal. At least since the late 1970s, Afghanistan has been a terrible place for women.

Yet U.S. power cannot be wielded for good where our troops fear every man is a crazed terrorist out to kill them and where, despairing of better options, we will always end up turning over power to the latest cooperative strongman.

Posted by janinsanfran at 12:01 AM

More and more women are likely raped there. Who commits these crimes?
Is it not US-army? Massacres of civilians, genocide, terror and rapes - activity of US army.

Guess I'm one of those WEFs (wild=eyed feminists)--different issues are my focus. Wish there were still parades on International Women's Day. But more than that wish there were a way to get young women energized now that we "solved" everything for them...think Roe v. Wade. Sigh.

RE: Anonymous' wondering who commits these crimes.

In the mid-seventies, the first Trident submarines were being built and stationed in the Puget Sound (WA). We had access to an Environmental Impact Statement that the Navy had to do for it's base in the Northern Mariana Islands (the Commonwealth of the Northern Mariana Islands). Yes, we know there will be an increase in prostitution around the base. Yes, we know there will be resulting health care problems. Yes, we know this and we know that. But the base will go in anyway. The islands and the base are of strategic importance to the U.S.