The latest in security theater 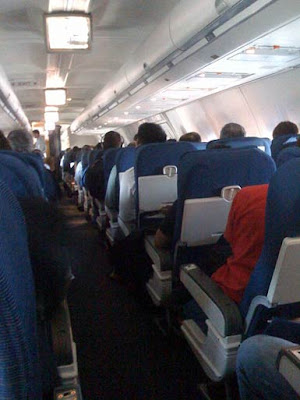 Last year the ACLU estimated that number of names on the U.S. government's watch list (people requiring special scrutiny when traveling) had reached one million. The Transportation Security Administration (TSA) said something like "oh no, not nearly so many..." They did say though they had a "terrorist watch list." Now they've apparently 'fessed up to the current number. USA Today reports

WASHINGTON -- The government's terrorist watch list has hit 1 million entries, up 32 percent since 2007.

Federal data show the rise comes despite the removal of 33,000 entries last year by the FBI's Terrorist Screening Center in an effort to purge the list of outdated information and remove people cleared in investigations.

It's unclear how many individuals those 33,000 records represent -- the center often uses multiple entries, or "identities," for a person to reflect variances in name spellings or other identifying information. The remaining million entries represent about 400,000 individuals, according to the center.

The new figures were provided by the screening center and the Office of the Director of National Intelligence in response to requests from USA TODAY.

At least under the new regime they answer some questions. There is still nothing to suggest that a list so large, based on so many suspect sources of information, assembled by a huge, inefficient, self-referential bureaucracy, serves any purpose except to remind air travelers to be very afraid of the terra-ists.
***
The stories of ordinary harmless people who find their travel impeded still surface too frequently. Here's a recent one.

Erich Scherfen was boarding a plane at Harrisburg International Airport to visit a sick friend in San Francisco when the ticket agent told him he was on "the list."

Days later, his wife, Rubina Tareen, was removed from a plane by a government agent, who went through her bags before letting her back on to travel back to Northeast Pennsylvania. Two months later, their vehicle was searched and they were questioned for hours before being allowed back into the United States after attending an Islamic conference in Canada.

The couple were never told why their names made it onto a terrorist watch list and their efforts to get an explanation have been largely unsuccessful, according to a lawsuit filed in Scranton's federal court by the American Civil Liberties Union.

Scherfen is a veteran of 17 years in the U.S. military as a helicopter pilot. His wife, a naturalized citizen originally from Pakistan, sells books on Islam from their home. Guess someone thought that was a threat.
***
The people of rural Alaska think the whole TSA rigmarole is a threat -- to their way of life. If you want to get around in much of the state, you fly small planes. But the TSA wants to enforce the security theater we go through in big commercial airports on these small planes and tiny towns they serve. According to KTVA in Anchorage,

Proposed TSA regulations devastating for Alaska pilots
Imagine every time you got in your car having to check with police to see if your passengers have a clean record and if they have an ID all because you drive an SUV or truck and are going out for a joy ride. That's basically what will happen to pilots who fly larger planes in Alaska, where skies replace roads as the main form of travel, if new TSA regulations pass as they are.

The Alaska Air Carriers Association describes it as a "one size fit's all" approach to air safety.

The Transportation Security Administration says for planes over 12,500 pounds to fly into or take off anywhere, there needs to be proper security measures taken like checking passengers against the "No Fly List" and having security screeners on site.

It would cost hundreds of thousands of dollars to upgrade airports and hire personnel to implement a regulation that makes no sense. What's a small plane going to attack out there: a glacier? Alaskan pilots are furious and are pushing back through their legislature.

UPDATE: The link above went dead since this post went up, but the Fairbanks News Miner reports the same issues.
***
The TSA says they are going to fix the ongoing absurdities in the system -- by collecting more information from air travelers. Soon, you'll have to hand over your birth date and sex as well as a credit card to buy plane tickets. They say they'll erase the data after seven days -- still I can see some identity thieves finding a bonanza when they get into this stuff. Airlines will have to spend millions upgrading their reservation systems to capture the new data. The Chicago Tribune reports the some doubts:

However, some experts concerned about invasion of privacy contend that Secure Flight works from the misguided premise that Americans do not have the right to travel and, to receive permission to travel, they must be checked out by the government. They say one danger is the airline security rules could be expanded to Amtrak, intercity buses like the Greyhound Lines and other common carriers.

Sobel, of the Cyber Privacy Project, argued that "a first-time bad guy or bad woman is not going to be on the list. The better, more cost-effective approach is good police work, good intelligence work, not tarring everybody with the same bad intentions."

That would be too sensible for the massive collection of spooks and paranoid cranks now clustered in the security theater employment growth sector.
Posted by janinsanfran at 10:03 PM

I don't think even George Orwell could have dreamed up this insanity. Your government at work.

The proposed TSA regulations for Alaska cover not only larger planes, but the twin-engine and turboprop aircraft used by bush pilots. The TSA regulations quoted by Jan mention “large planes.” These are not large planes like the ones I fly on Seattle/SF. What they’re talking about are typically planes that hold up to seven people, including pilot(s). The airports affected by the proposal are in places that most people in the lower-48 have never heard of. From an article in the Juneau Empire (.com) “An estimated 100 aircraft in the state would fall under the new rules at a cost of about $190,000 per airplane - costs that air carriers would likely pass on to passengers.”

I’m focusing on this section of what Jan wrote because I’ve met Native women in rural Alaska who depend on bush pilots for their cancer treatment. It’s already life-threatening if the weather keeps someone from their cancer treatment and/or receiving medicines. Doesn’t take much to imagine what it might be like if everything in the bush was subjected to TSA scrutiny.