Because I'm a curious codger, I participated in this weekend's Organizing for America (OFA) project and collected signatures on a pledge to support the President's budget. I certainly do support his emphasis on education funding, a more sustainable energy policy and the need for universal health care, though I'd do more, more expensively, than he has proposed. But Obama's what we've got and we need him to be able to forge ahead on these priorities, so I'm happy to help. 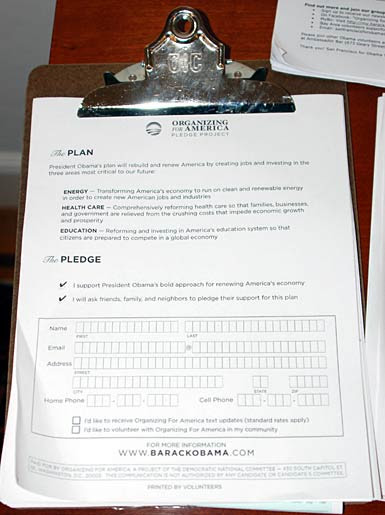 The pledge form is non-specific. It certainly doesn't overwhelm anyone with policy details. It reads

I will ask friends, family and neighbors to pledge their support for this plan.

My only criticism is that trying to make it easy for the folks doing data entry by putting each pledge on a single page mostly consisting of little boxes cedes the excitement you can get out of having a series of people sign on a list on the same page. That kind of form gives people a sense they are adhering to a movement.

Because I'm hobbled at the moment, I didn't go door to door, but rather collected pledges at our house party for World Water Day and then at church. The folks I signed up could be categorized as pretty politically sophisticated. If an election were a week away, you'd have a chance of getting them to do a little volunteer work. Not one of them suggested that Obama was failing because AIG profiteers got big bonuses or because Secretary of the Treasury Geithner's plan for the financial sector is too management friendly.

Folks seemed to recognize that Obama has inherited a colossal mess -- and are willing to give his efforts the benefit of the doubt. There was no sense whatever that in New York Times columnist Frank Rich's phrase, Obama is facing a "Katrina moment." We may eventually sour on the guy, but for now, the small sample I talked with aren't there or even very worried.

Maybe David Axelrod was right in his somewhat infamous pronouncement:

"People are not sitting around their kitchen tables thinking about [bonuses paid to insiders at bankrupt] AIG..."

***
Bonus: this O.F.A. pledge collection training video [7:36] is as good an example of volunteer training for a mass mobilization as I've ever seen.

Posted by janinsanfran at 4:10 PM