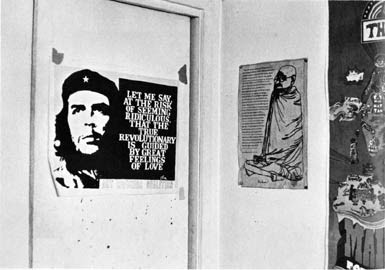 A wall of the office at 36 East 1st. Street where Walter worked in the early 1970s. Photo by Jon Erikson.

This morning I learned by way of Frank Cordero's email list (he's at the Desmoines Catholic Worker) that Walter Kerrell had died. I remember Walter as a central figure at the New York Catholic Worker house in the early 1970s, anchoring a chaotic office, keeping some order among the cantankerous crew who hand labeled 80,000 copies of the newspaper for mailing right outside his door, ever ready to talk with newcomers, especially good looking young men. He did like the cute guys.

For a place whose essence was the practice of hospitality, the Catholic Worker movement's "mother house" wasn't a particularly easy place for a newcomer. I think that happens in a community practicing inclusive, radical hospitality. After you've lived for a while amid an endless flow of the needy and the eager, you don't let the latest arrivals get to know you lightly. What's the point? Some are leeches or frauds; even the nice ones will go away. Everyone in such places shuts down to some extent. But some seem to have a special calling for welcoming newcomers. He could be gruff, but Walter was one of those.

I don't really know much about him. He was of Jewish origin, and when I knew him, not any kind of practicing Christian that I could see. This wasn't unusual; many of us in the community weren't Catholic and many of those who were Christians were not demonstratively pious. On the other hand, there were also a good number of the extremely publically devout. Walter had worked at the house for at least 10 years. He lived away from the house, showing up every morning, disappearing before dinner. Gradually, I learned he was an artist, a painter.

Eventually I hung around long enough to get invited to dinner at Walter's apartment. I remember good food -- and the most wonderful collection of painted masks made from the dried shells of horseshoe crabs. These were readily available on the beaches of Staten Island in those days. They may still be -- apparenty these primeval arthropods are not considered endangered, though their population is shrinking.

It's hard to know quite why Walter let me into his life a little bit. After all, I was a girl, not the sort of community passerby he usually became more than superficially acquainted with. Perhaps I was okay because very butch and quite obviously a lesbian, little as I wanted anyone to notice. It would be a few more years before I understood that God really meant it when She declared her creation "good" -- and that meant even me.

I took off for California in 1973 and spent several years in the Catholic Worker community that launched the Martin de Porres House of Hospitality. Sometime in mid-decade Walter turned up there along with another fixture of the New York CW, an unemployed and probably unemployable actor, Mark Samara. They were clearly looking for the freewheeling gay culture San Francisco was famous for, but their older, artistic East Village queen style didn't mesh successfully with the beautiful young hippie masculinity then ascendant. I'm sure they seemed a couple of leering old trolls.

That was the last I saw of Walter. Googling today, I discovered a memoir that reports:

... Walter retired from the Worker and went out of his way to avoid it. The organization aroused fierce loyalty and fierce antagonism, sometimes in the same person.

That certainly sounds right. Walter wasn't alone in ending up making a painful break with a community he had given so much to. It happened a lot in those years.

The barely hidden secret of that First Street Catholic Worker community in the 1970s was that it was full of gay people. None of them, of us, were "out" in the contemporary meaning of that term, even if it was generally known that a particular individual was homosexual. Certainly being happily gay and happily Christian was unthinkable -- you were supposed to choose between the way you loved humans and the way you loved God. This mandatory false choice made for a lot of very confused people, quite a number of whom were working out their inner conflicts in the relatively accepting refuge of the Catholic Worker. Meanwhile gay liberation and radical lesbian feminism were flowering all around us, freeing many who'd been forced to put up with living partial lives. Some of these angrily repudiated the Catholic Worker when they were able to become their full selves. Dorothy Day was hurt by these breaks without being judgmental of individuals.

I suspect Walter Kerrell made such a break sometime in the late 1970s. He was a good person and kind to many wanderers in the big city, including me.

Posted by janinsanfran at 8:31 PM

Email ThisBlogThis!Share to TwitterShare to FacebookShare to Pinterest
Labels: gone but not forgotten, history

Jan, I was delighted to read your memory of Walter. I knew him quite well in the mid 1970s when I arrived at the CW. I never knew what happened to him. I wonder if you have any letters from Dorothy Day that I could see for the volume I am editing (the companion to The Duty of Delight). There was something in the diaries that I would like to share with you. Robert Ellsberg. Rellsberg@maryknoll.org

Wow, your roots do go deep. So what did happen to them in San Francisco? Did they leave immediately, or stay? And the fact that he's just died literally makes him a Longtime Survivor.

Oh how I remember that Gandhi poster from the War Resisters League national office in the early 70's. Thank you for sharing a little bit of CW history with us.

I did volunteer work for Catholic Charities in Brooklyn for some time in the 70s. The office for the Blind was overrun at the time by the Office of the mentally handicapped when they merged.My lover was on the payroll and I did the volunteer aspect. I will neer forget how the priest humiliated us in front of a large gathering as fags and queers and stated he would do everything in his power to get us out. My lover was fired for using the wrong color paper for a memo, and I of course followed naturally. I will never forget the venom in that priest's words and actions. I remember his name but won't call it up here.

Jan, a lovely memorial. I've long been an admirer of Dorothy Day and the CW movement, but - alas! - they were not perfect.

Berry, fie on that bigoted priest!

I,too, remember Walter fondly. Like, Jan, my experience at the CW was that the older folks barely acknowledged the existence of the new, young volunteers. And, really, why should they? We came and went as quickley as the seasons. Walter was kind to me, gave me cigarettes and scolded me. But he talked with me and joked and that was more than many of the older people did. Arthur leered, Mark S. flirted and John argued unpleasantly. I think that I was too young to benefit as much as I may have when I was there but it still remains a powerful memory. And- it is very nice to have re-discovered Jan Adams! Henry Scott