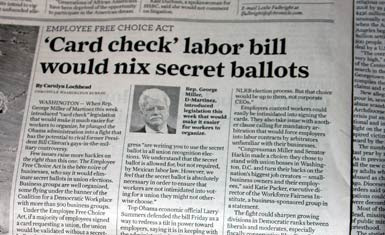 If the San Francisco Chronicle is going to print crap like that pictured above, it is hard to give a damn whether it survives its economic difficulties.

That headline is quite simply a Chamber of Commerce talking point against of the subject of the article. The substance is actually well captured in first sentences:

Washington - -- When Rep. George Miller of Martinez this week introduced "card check" legislation that would make it much easier for workers to organize, he plunged the Obama administration into a fight that has the potential to rival former President Bill Clinton's gays-in-the-military controversy.

Few issues raise more hackles on the right than this one. The Employee Free Choice Act is the bête noire of businesses, who say it would eliminate secret ballots in union elections.

An honest headline writer might have written something like "Labor measure introduced; angers big business". But no. Instead the Chron repeated what its own reporter called the arguments of "the right."

Interestingly, on the online version here, they've cleaned up the headline to read, "'Card check' labor bill stirs controversy". Much better.
***
Chronicle workers voted the inevitable today, okaying the concessions that will lead to 150 people losing jobs while those who remain see seniority gutted, longer work weeks and less benefits.

The Chron is almost certain to go under anyway; the model of selling advertisers the eyes of readers of print media is dying. Complaining about this is like complaining that monkish copyists, the fellows who produced those lovely illuminated manuscripts, were done in by the printing press. Technology has upended how people get information -- but the new modes have only increased demand. Some way will be found to profitably meet that demand; that's one of the rare functions I do trust the market to accomplish.

Posted by janinsanfran at 7:36 PM

The Seattle Post-Intelligencer is ceasing print publication tomorrow after 146 years. This is the daily paper that most recently exposed honey laundering (bogus claims of organic, local and/or pure honey with no government oversight) in December and Boy Scouts selling or logging land that had been donated for camping in January. Most of us will probably find a way to get the news (or what passes as news), while people like my mother who has never sat in front of a computer will go without.

Wonder how much more difficult it will soon become to find a place to sit in a coffee shop, with even more people taking up more than one space with their laptops?

I can't wait for the fucking Chronicle to die. What a hideous history that newspaper has, and what a terrible public citizen it has been. Whoever replaces it will be an evolution. It will be hard not to do better.

I just don't understand why outright critics especially in the papers. There is no need or space anymore for these types of write-ups