Obama's war
Some thoughts on solidarity 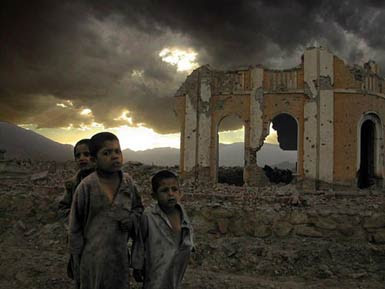 So Obama's gone and got his own war now. Not a good thing. Where's that exit strategy, Mr. President? Unlike policy-bemused insiders, Rachel Maddow cuts to the heart of what's wrong with Obama's Afghanistan moves. Here's what she hoped for:

"War is destructive. The idea that you can do something constructive with war is becoming this facile, dangerous, intellectually lax political interpretation of military counter-insurgency theory. I want to hear him say that doesn't work. That war is never constructive. I think liberals, even, are drifting toward that. It's become the new liberal hawkishness and I don't want him to be a hawk."

He couldn't quite rise to that challenge. Democrats still believe they have to prove they are butch when it comes to foreign enemies.

Naturally the militarist Max Boot (wouldn't you think the guy would be ashamed to flaunt that name?) thinks Obama got it right.

The new Afghanistan policy that President Obama unveiled at the White House today was pretty much all that supporters of the war effort could have asked for, and probably pretty similar to what a President McCain would have decided on.

I don't know if I'd quite go that far; I'd assume that McCain would have implemented a similar policy with maximum venality and stupidity while the Obama-ites know they can't afford that.

The most appealing argument for ongoing U.S. engagement in Afghanistan came today from Sarah Chayes, the former NPR reporter who has helped establish a soap making cooperative in Kandahar since the U.S. invasion. She reports the dashed hopes of Afghans she works with:

... when Obama said recently that there were no plans on tap to "rebuild Afghanistan into a Jeffersonian democracy," or when Defense Secretary Robert M. Gates said the aim wasn't to create "some sort of Central Asian Valhalla over there," my colleagues were listening. Such formulations have the effect on Afghans of a cold shower.

She recounts how Bush and Rumsfeld ran their Afghan project on the cheap, buying cooperative client warlords whose greed and violence undercut the Karzai government which itself degenerated into corruption and drug running. Not surprisingly, Afghans began to wish for the austere "security" the Taliban promised.

Chayes' plaint is very like that of Ahmed Rashid in Descent into Chaos. The invaders have proved not to care about their promises of development and democracy. We're going to hear a lot of this. The Afghans who have the education and inclination to talk to us are precisely the members of a nascent "middle class" who begin to visualize life in a modern world. In Pakistan, there really is such a bourgeoisie -- they've been fighting to reinstate the fired Chief Justice of the Supreme Court. They desparately want to rise above the corruption of the tribally-aligned political parties. They do wish, despite years of hard experience to the contrary, that U.S. meddling in Central Asia would help them come into their own.

It's not going to happen. The hard truth is that peoples have to find their own way. Individuals and private groups of citizens from other countries can and should help, but foreign governments can't jump start healthy social processes in other people's countries. We need global solidarity -- but it will have to be of the people to people sort, not mediated by the U.S. Marines.

Posted by janinsanfran at 6:25 PM