A prophecy of doom 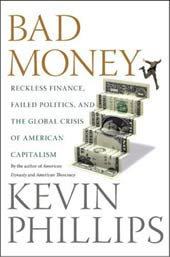 Kevin Phillips' Bad Money: Reckless Finance, Failed Politics and the Global Crisis of American Capitalism was published about a year ago now. Don't we all wish he'd been off the mark about the impending collapse of our financial house of cards. But he wasn't.

Phillips has made a habit of being right. He was a leading conservative political operative in the Nixon era, propounding the racist Southern strategy that gave us nearly 40 years of right wing rule from Reagan onward (and now has led to the marginalization of Republicans as a cranky regional party.) Phillips however was later repulsed by the fundagelicals and demagogic cranks who came to command the Republican Party, while never convinced that Democrats gave a damn about the wellbeing of most citizens either. He's become a nonpartisan skeptical curmudgeon about the U.S. political class, denouncing the dynastic politics of the Bushes as well as Wall Street financiers and Sun Belt (the label is one of his coinages) oil barons.

This book is about the financialization of the U.S. economy, the long trend started in the 1970s away from manufacturing and other real enterprises toward passing paper around and pretending it has value. It's pretty dense -- and scary as hell. He believes the United States is well into imperial decline and doesn't expect a reversal of the trend line.

He's exceedingly doubtful whether the country retains within its political institutions the capacity to right itself. He indicts the ostensible competitors for the job:

Parties and factions can also run out of creativity. ...The Republicans were discredited by eight years of failure in war, diplomacy and fiscal honesty, and the Democrats won no laurel wreaths for effective opposition. Institutionally, the 180-year-old Democratic Party and the 150-year-old Republican Party have, over the last 40 years, uprooted themselves from what were their constituencies and allegiances as late as the 1960s. Gone on the Democratic side is the southern and western geography of opposition to northeastern financial elites.... Instead there is a new Democratic politics of new national elites -- financial, high-tech, and communications.

When I read Paul Krugman on what he considers the inexplicable failure of Obama's Treasury Department to simply nationalize failed banks, I have to think of Phillips' contention that the Dems now represent precisely the people who profited from getting us into the financial mess. Here's yesterday's sample of Krugman:

The Big Dither
...officials still aren’t willing to face the facts. They don’t want to face up to the dire state of major financial institutions because it’s very hard to rescue an essentially insolvent bank without, at least temporarily, taking it over. And temporary nationalization is still, apparently, considered unthinkable.

But this refusal to face the facts means, in practice, an absence of action.

And yet -- and yet -- although we've all become sadly accustomed to stasis and blustering imperial decline, at moments the Obama regime seems to have unmoored all the certainties we thought we were bound by. The President, verbally anyway, demonstrates over and over that he aims to juggle imperial overstretch, banking fraud and collapse, universal healthcare, energy needs, and climate crisis all at once. It's precisely this promise that makes the man so infuriating when we know he is wrong, as on continued lawless detentions and too great deference to the professional spooks and military.

Because the situation is so dire, there is some political space to enable some of this new agenda to happen. We live in strange times, caught between hope and the informed pessimism of experience. Phillips contributes sharp observation to the unfolding picture.

Posted by janinsanfran at 10:16 PM