A conscience exemption for florists

For anyone who may have thought that Life under the microscope was a little harsh, read this:

Concerned that the state's new same-sex marriage law would infringe on religious liberties, the Connecticut Catholic Conference today proposed some broad exemptions which it believes are necessary to protect those rights.

The law does not require Catholic priests -- or any other clergy member -- to preside over same-sex weddings.

However, the church is seeking additional exemptions. For instance, it wants to ensure that a florist opposed to gay marriage on religious grounds not be forced to sell flowers to a same-sex couple.

In some people, "Christianity" leads to insanity. Other it improves...

The Courant's accompanying reader poll was running about even on Saturday morning. Follow this link if you want to see how it changes. 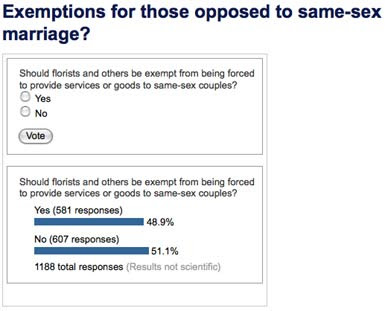 Posted by janinsanfran at 9:56 AM

I think the Catholic church still believes the earth is flat. I do wish it wouldn't take them centuries to catch up to science and reality.

It's shocking that 48% approves of this ban on florists, etc. What are they thinking? Oh wait - they're not.

sfmike took the words right out of my mouth. Did the people who crafted this item know what they were doing? FLORISTS?! Talk about being out of touch with reality.