Not addressed to me 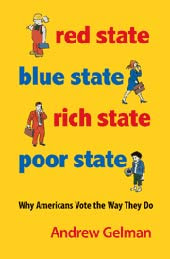 Gelman provides a summary of the book's aim in his conclusion; he's out to refute a journalistic misconception.

We wrote this book as a corrective to what we see as persistent confusion about class in the American electoral process. On the one hand, it is natural to personify states -- to see Democrats winning rich states and to then assume that this implies that rich people now vote Democratic. In fact this is only true for a handful of rich states -- ironically, precisely those states where national journalists are likely to live.

Suburban Montgomery County is a Democratic stronghold -- but so is rural south Texas. ...

I get the point, but not being a journalist, but rather an electoral practitioner, it would never occur to me to make the assumption Gelman is critiquing. After all, there's usually readily available data about actual voting outcomes in particular geographical areas that have knowable socio-economic characteristics. I wouldn't dream of designing a campaign anywhere without digging into those patterns.

If you need it proved that rich people mostly vote Republican, but more so in poor states, this book does a good job. If you want data to suggest that richer people have somewhat more internally coherent political opinions and so are more like most journalists than are poorer people whose ideas look like a hodgepodge to their better off fellow citizens, that story is here. (That one, most people who have canvassed voters a bit could tell you.)

I guess I'm not the audience for this book. It proves, quite thoroughly, things I can't use.

Posted by janinsanfran at 12:05 AM