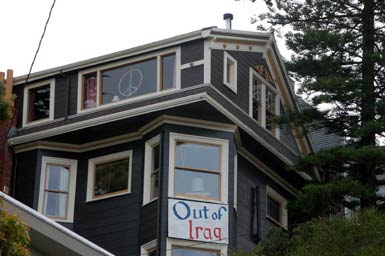 Will this San Francisco household finally be able to take down its sign?

All weekend I've been reading and talking with friends about the question: should we believe that President Obama is really on track to take the U.S. out of Iraq? On Friday he told an audience of Marines:

Today, I've come to speak to you about how the war in Iraq will end. ... We will not let the pursuit of the perfect stand in the way of achievable goals.

We cannot rid Iraq of every single individual who opposes America or sympathizes with our adversaries. We cannot police Iraq's streets indefinitely until they are completely safe, nor can we stay until Iraq's union is perfect. ...

By August 31, 2010, our combat mission in Iraq will end. ... And under the status-of-forces agreement with the Iraqi government, I intend to remove all U.S. troops from Iraq by the end of 2011.

It's not surprising we don't easily believe him. Everything we've been told about the U.S. in Iraq has been a lie, arguably since the first Gulf War in 1991. That unhappy country -- rich in oil our leaders crave but stubbornly nationalist -- has been misrepresented to us by Washington politicians for so long, we properly don't trust a word they say.

But, along with much more knowledgeable observers like Juan Cole, I think Obama means this. Now that he's President, we're beginning to see a pattern to how he moves through the minefield that is the national political landscape. So, after six years, Iraq is trashed -- one fifth of its people dead, wounded or displaced -- but the United States will extricate itself. That's not a good end, but it means a chance for new beginnings.

Posted by janinsanfran at 11:00 AM

So we only have to live with the sickening knowledge that it is only the war profiteers who benefit from the illegal and immoral war? The years 2006 through 2011, in my view, serve allow for the twisting of upcoming elections to assure those U.S., British and other non-Iraqi corporate conclusion of the rape of Iraq.
I am ill, but,I think, not blinded.

I think it's not so much a matter of what Obama wants or intends as an individual (albeit the president!), but also/moreover
(a) how much power he actually has vis-a-vis the national security state and its economic overlords, which is based partly on
(b) how much total political capital he has and can generate; and
(c) where and when he's willing to spend it.

Obviously he's spent a lot very fast, on a mostly social agenda. And of course he's spent trillions of dollars that don't exist. Not his fault, really, having inherited the collapse, two wars, and an outrageous fiscal deficit (except for the ongoing bank bailouts which are a world-historic ripoff and make me want to review my history of Argentina since 2000, but I digress... sortof.)

I think he can get away with troop withdrawals from Iraq as long as it doesn't threaten long-term US presence, which, as Phyllis Bennis pointed out, could (after withdrawal of combat troops), still comprise non-combat troops, the 150,000 or so contractors or some subset of them, war materiel (no one talks about this) and of course, the bases to stash it all on (and be ready to redeploy to). I think the bases were the first objective and the most important. I agree that much of the military and part of the right-wing want out of Iraq in terms of active combat operations, but the scope of US military operations ranges far beyond combat to include "humanitarian" and now "stability operations," sometimes before and often long after "war" itself. It's not a new thing, but State, USAID, etc. are now part of the overall mission and operations in almost any national security or major military operation. All of this can continue without combat troops.

I also agree that Obama inherited cover but could also be the fall guy who takes the blame if/as it "goes badly," whatever that is deemed to mean.

I agree Obama is astute and strategic. Still, I take *all* political speech as rhetoric; I *never* presume it is sincere. It is possible that Obama is trying to outflank the right wing of his own party by seeming to go along with their agenda, yet under-resourcing it (e.g., 17,000 US troops in Afghanistan, vs. 30K or something). I don't think this is likely, but I think it is possible that he is assuaging the national security state while he plots a real de-escalation. However, this would have to include Israel/ Palestine and *that* I just don't see happening.

The PNAC docs indicate the overarching goal of elites (at least the neocons) has been for years to establish a substantial American force presence in the Gulf region. The US military has that now. Even with troops gone, they still have a footprint and a foothold, especially if they can engineer a quasi-compliant government (and continue interfering if/as require to ensure this). Most important, I would think, would be retaining access to bases and rights to e.g., land, refuel, redeploy, etc., under some contingencies we'd specify and could use later.

Further, I think it's possible for the US to shift some of the regional strategy and goals from Iraq to Afghanistan, which of course is both encirclement of Iran (now from the east as well as west i.e., Iraq), encirclement of China, strategic access to oil and pipelines/routes, and some control over potential supply routes to China through Iran and/or Pakistan (I believe that geopolitical realpolitik entails denying goods like oil to your enemies as much as grabbing it for yourself). Afghanistan is a better 'sell' to the American public as Iraq is getting old (I know; it's awful, but it's true) and people can be re-convinced that our true enemies are in Afghanistan.

So in conclusion, I think Obama will probably follow through on what he's promised. But I don't think it necessarily means the end of war in Iraq, nor the end of occupation, nor certainly the end of US war in the region.

On a related note, I was shocked to read that the latest $410 billion budget keeps the federal government in operation through *September*. I mean, this is like how California's been operating while our deficits were on the same order as our budget -- crazy, desperate bandaids-and-bubblegum strategies. Is this the future? I think we are in for major and continuing shocks -- personal, national, and geopolitical -- as the reality of the economic collapse continues to play out, tax revenues fall at all levels of government, and popular discontent grows, including with overseas capital which funds our fiscal deficit. It changes Obama's political capital. If he seems to be supporting 'regular people,' he will have more - with the public, not necessarily with the majority in Congress or e.g., China or Japan. If he appears to be siding with elites including the military at the expense of the public, his capital (with us) will fall. Right now he is trying to please both sides. I don't know whether this can last.