What's Obama doing to get U.S out of Afghanistan? 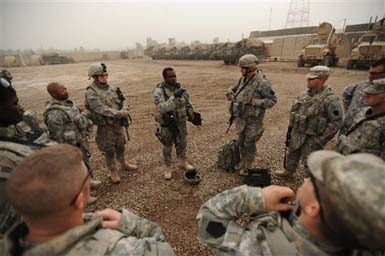 Glimpses of President Obama's Afghanistan strategy are leaking out -- apparently we'll get a fuller picture tomorrow. Marc Ambinder, who seems to have good sources, reports that he's sending a smaller number of troops than the military had been pushing for -- and calling them "trainers." It also looks like he's emphasizing cooperation with neighboring countries -- and that includes Iran. And he's talking counter-terrorism rather than counter-insurgency. That latter is contemporary shorthand for U.S. occupation; the former at least puts widely acknowledged U.S. interests -- we don't want these countries harboring people who would attack us -- in the forefront. Still these moves take ownership of and escalate a failed war.

Ambinder focuses on Washington's discontent with Hamid Karzai, the sitting President of Afghanistan, and Asif Ali Zardari, the President of Pakistan.

Reading that makes me hope that Obama has learned his Vietnam era history, even though he wants us to move beyond that era. In the later stages of our Southeast Asian adventure, the U.S. was playing mix and match implanting illegitimate local strongmen not only in Vietnam, but also in Laos and Cambodia. None of that did anything but kill and immiserate more people. Let's hope Obama declines to get involved in trying to "fix" Afghan and Pakistani politics -- that's a recipe for generational war and hatred. (See also Descent into Chaos.)

In the pulling and hauling among folks trying to influence Obama's Afghanistan choices, there have been a few interesting contributions. By far the most cogent that I've seen came from one Dan Simpson, a retired career diplomat who once served as Ambassador to Somalia. He stated his rather dire conclusions in the Pittsburgh Post-Gazette.

Bottom line: The United States is not going to get matters in Pakistan under control.

Rest of the bottom line: If the United States can't get matters in Pakistan under control -- and as even Mr. Obama's own special representative to Pakistan and Afghanistan, Ambassador Richard Holbrooke, has said, the problems in the two countries are inextricably linked -- Mr. Obama's escalation of the conflict in Afghanistan by adding thousands more U.S. troops simply is not going to work.

If it is not going to work, there is no reason to pursue it, spending more of our money and blood.

For the peace movement, regardless of what the President says tomorrow, he's already uttered the most important words he can say about Afghanistan:

Unless he's prepared to repudiate that, he's given us a standard by which to measure U.S. involvement in Afghanistan: how does it lead to getting us out? That's really the only question left to answer -- the rest of "policy" is interim fluff, best ignored as deadly obfuscation.

Let's keep asking: What's the President doing to get us out of Afghanistan today?
Posted by janinsanfran at 3:41 PM

Ultimately there is no future in Afghanistan other than the exit door, any more than there is a chance for the politics of Pakistan or Afghanistan to develop other than through a Western declaration of non-interference. Whether US politics would accept such a step at the moment is doubtful.