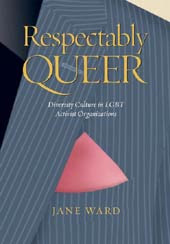 There's something about the movement for gay and lesbian rights that inspires great two-word book titles. Almost fifteen years ago Urvashi Vaid offered Virtual Equality. That book chronicled the growth of professional gay advocacy centered in Washington -- and its limits as increased access under the Clinton administration failed to produce either equality or political power for LGBT people.

Around the same time, Andrew Sullivan came along with Virtually Normal which argued that gay folks could achieve equality if we'd just get married and kill for peace like everyone else. Contemporary gay political activity certainly follows this line. (Sullivan is a much more interesting and subtle thinker than I've suggested in that catty description -- try reading his interesting if sometimes infuriating blog, for a smidgen of Sullivan.)

Now along comes Jane Ward with Respectably Queer: Diversity Culture in LGBT Activist Organizations. Great title, interesting topic. In the early part of this decade, Ward did "participant research" at three Los Angeles LGBT institutions: Christopher Street West which puts on a West Hollywood-based Gay Pride celebration; the L.A. Gay and Lesbian Center, a social service behemoth; and Bienestar, an HIV/AIDS nonprofit that came out of the Latina(o) gay community. In each case, she takes us beneath the surface of institutions that aren't actually doing very well at living with the differences among the folks who make them up and the people in communities they relate to.

At Christopher Street West, contemporary expectations had moved on and left the founders of this annual community party behind. It's grassroots board was clueless about how to play the game of representing themselves as involving a range of racial and gender communities in order to win the support of corporations and local governments. They just wanted a good party. Younger gay professionals who knew the new rules quite easily pushed the old timers aside. It is not clear from Ward's account whether the working class board members really objected to being ousted as the scale of the project seemed to have gotten away from them.

At the L.A. Gay and Lesbian Center, the game of demonstrating the institution's "diversity" to funders was paramount. An informant described the place's culture as "corporate." Though many (most?) of the staff at the time of Ward's observation were people of color, the center continued to be thought of as "white and male" by its public. It imposed a stilted "Diversity Day" on staff without beginning to satisfy the urgent hope among people of color that it should "just do it" by serving their communities.

At Bienestar, changes in the community (and funding sources) left the institution's Latina foremothers out in the cold. The organization evolved out of a gay and lesbian Latina(o) group under the stress of the AIDS crisis. Lesbians had been at the center of the predecessor group, but when Bienestar became a channel for AIDS services for Latin gay men, their interests and needs ceased to be central. Ward describes the awkward attempt many AIDS organizations around the country made to sell funders on AIDS prevention for lesbians -- but in truth, unless we were shooting drugs, we weren't much at risk. During Ward's observation period, lesbian staff tried to reassert themselves within the organization, but this was a losing cause.

Unfortunately, Ward originally wrote this as a dissertation. As a consequence the stories she has to tell are encumbered with a review of "diversity" literature and a not very convincing theoretical framework that obscures more than it reveals about the institutions whose hidden structures she plumbed. She probably needed all this stuff for academic credibility; she'd have had a better book without most of it.

As a participant in lesbian and feminist efforts over the last 35 years to create multi-racial and multi-class institutions, I know there are some fascinating stories to be told about how places like these found themselves such suckers for the kind of mechanical and unsatisfying "diversity" projects that Ward describes. But the flavor of how we got there isn't to be found in academic theorizing -- this is the stuff of personal histories, particularly of how women of color demanded that white women stop fooling themselves about how different histories determined different meanings and outcomes -- and how, whatever we've got, it's everyone's pie.

Perhaps in the future, having established her academic credentials, Ward can do some further investigation. She has certainly proved she knows where to look.
Posted by janinsanfran at 4:35 PM