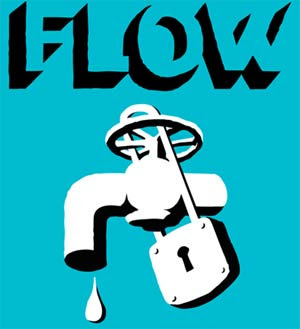 Last night a bunch of us got together to watch the film FLOW: For the Love of Water. The documentary asks "Can anyone really own water?"

Of course the usual suspects, the rapacious corporations that want to turn all human life into a source of profit, indeed intend to own the water. And in many places they do -- or try to. The film documents popular struggles over water in South Africa, India, Bolivia, and Michigan. The film's website provides a wide but not exhaustive list of organizations through which to get involved. Many of us last night have been involved through El Porvenir which works in rural Nicaragua. (More Nicaragua water stories here.)

World Water Day, marked annually on March 22, was called for by the United Nations to raise the visibility of water issues. A commenter from Nepal warns on the UN website: "the third world war will be about water."

In some ways, water is one of the world's easy populist issues. Very few of us are major stockholders in Nestle or the other water profiteers. We retain a pre-modern instinct that water is both life itself and a common good. Water as commodity is still strange -- well, maybe not to legions of gym-oriented, water bottle toting fitness fanatics, but to most of us. Reviving the common good culture about water seems within reach of determined campaigners.

Here in California, a desert made fertile by irrigation, we're going to forcibly discover that access to water is what has made the state work -- and that this access is in danger. Energy Secretary Steven Chu believes global warming, unless slowed, is going upset our equilibrium. First we'll see more droughts. Then

"I don't think the American public has gripped in its gut what could happen," he told the Los Angeles Times in his first interview since taking the post. "We're looking at a scenario where there's no more agriculture in California. I don't actually see how they can keep their cities going."

Are we capable of imagining that much change? It's tough -- the same human historical memory that helps us understand that water is a common good makes it hard for us to apprehend that we might be making the planet into a very much less habitable place.

Posted by janinsanfran at 8:41 AM