An agitator goes inside 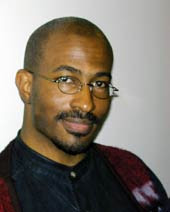 ...Jones will help direct the administration's efforts to create "21st century jobs that improve energy efficiency and utilize renewable resources" with a specific focus on "improvements and opportunities for vulnerable communities," according to a written statement from Nancy Sutley, chair of the Council on Environmental Quality.

He's qualified. For several years he has been evangelizing for the novel notion that greening the country could not only save the planet but also provide jobs for poor people left out of urban prosperity. So he gets a chance to prove it.

Van has for some years now been an example of what I think of as "organizing by attraction." Instead of the politics of injustice denounced -- however much these are needed -- he has been trying to show people concretely how to make things better. He had a great quote in a profile in Outside magazine awhile back that I kept as an illustration of this:

Look at Dr. King. There's no reason in the world for him to have given any speech in 1963 except 'I have a complaint! I have a list of things about which I am thoroughly pissed off!' But look at his speech. Look at the outcome: not perfect, but certainly a lot better than we had.

That attitude may help Van survive Washington.
***
Mostly I'm just glad to see someone I've known politically for fifteen years having, and seizing, the chance to go inside the system and try to make workable policy out of progressive ideas.

Even since 1980, with only a brief breathing space in the first couple of Clinton years, all progressives have been able to do is lob brickbats at the terrible deformation of the U.S. government. Washington has taken our tax money, thrown it to cronies and the military, and allowed social squalor to deepen.

Maybe that's all our system in its current form can do -- but we have lost several generations of smart, caring people who didn't even get to test themselves at the project of doing better. The Obama administration won't be able to enact a progressive universal health plan, improve education, or begin to curb the carbon economy without aroused people pushing from outside. But also, some of those who've been outside need to get inside -- and then push from there. Apparently opportunities are opening up, at least a little.
Posted by janinsanfran at 8:30 PM