A Bolivian grassroots campaign on film 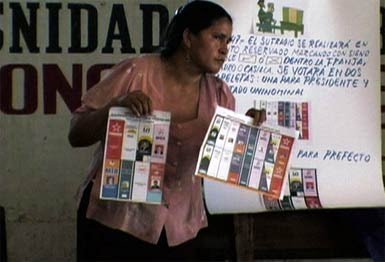 Have you ever wondered how it was possible that Evo Morales came to be elected President of Bolivia in 2005? Probably not, but it is a question worth pondering. After all the guy had two very serious strikes against him. He's indigenous (an Ayamara) in a country that had been ruled by the "white" descendants of Spanish conquerors for 500 years. And he's not only a socialist, but also the leader of the coca growers unions, peasant villains in the U.S.-sponsored War on Drugs.

According to the intriguing documentary Cocalero, the answer is simple: Evo Morales ran a simple, low budget, back-to-basics campaign. A film crew followed him for the 80 days leading up the December election and what they record is the ordinary nuts and bolts of any well-run grassroots operation. You get to see it all: And it all worked. Evo won with 53.7 percent of the vote in an election that brought out 84.5 percent of the electorate. His vote turned out. (He has since increased his margin in a recall in 2008.)

The film would be well worth seeing by grassroots campaigners in the United States. We have a lot more technology -- and this makes it possible for us to work fast and at scale. But what needs to be done is not really very different.
***
Obviously there was more to Evo Morales' victory than just good campaign mechanics. His message of using Bolivia's resources for the benefit of Bolivia's majority was popular -- and he had the good fortune to come along at a moment when the Yankees up north were distracted by a couple of far flung wars. Such moments of U.S. inattention have historically been good for Latin American progress, notably during World War II and the Vietnam War.

For regular reports from Bolivia written by U.S. residents there who have a handle on both countries, see the Blog from Bolivia.
Posted by janinsanfran at 12:05 AM