But isn't the U.S. a religious country? 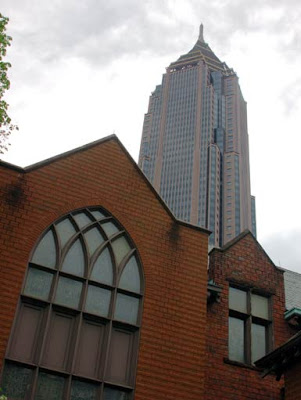 A huge survey of people in the U.S. released last week reveals some slightly counter-intuitive data about our religiosity. For all the noise from the religious right, apparently more and more of us are moving away from old allegiances. Here's a representative summary:

The percentage of people who call themselves in some way Christian has dropped more than 11 percent in a generation. The faithful have scattered out of their traditional bases: The Bible Belt is less Baptist. The Rust Belt is less Catholic. And everywhere, more people are exploring spiritual frontiers -- or falling off the faith map completely. ...

So many Americans claim no religion at all (15 percent, up from 8 percent in 1990), that this category now outranks every other major U.S. religious group except Catholics and Baptists. In a nation that has long been mostly Christian, "the challenge to Christianity … does not come from other religions but from a rejection of all forms of organized religion," the report concludes.

This Christian (I mean myself) says "Praise be!" Too much tawdry drivel is peddled in the public arena as Christianity: a prosperity gospel that celebrates wealth; "moral" stances that amount to primitive prejudices; ignorance that seeks to suppress science. I'm glad to see the appeal of that stuff waning in the general decline of religiosity.

In the United States religion exercises but little influence upon the laws and upon the details of public opinion; but it directs the customs of the community, and, by regulating domestic life, it regulates the state.

The contemporary religious right has sought, and sometimes won, far more direct control over our daily lives. What Toqueville saw seems a better relationship. Whatever belief or non-belief we adopt forms our consciences; our consciences, we hope, are the foundation from which we derive our political opinions and policy prescriptions.

That seems such an obvious way of describing democracy in a religiously pluralist society as to be hardly worth stating. It was elementary civics when I was growing up. It’s a measure of how far we've fallen away from the peculiar history of this country under pressure from aggressive aspiring theocrats that the statement is even worth repeating.

Posted by janinsanfran at 1:04 PM

Thank goodness the pendulum is swinging the other way. The far right Christians were very well organized and were determined to instill their brand of fundamentalism on the rest of us. I hope they continue to fall by the wayside as people become more tolerant.

I'm not 100% convinced there is a “general decline of religiosity.” Readers Digest recently teamed up with Rick Warren to publish his “Purpose Driven Connection” magazine. Publishers Weekly states that his “The Purpose Driven Life” is the best-selling hardcover in U.S. history. TEXT

From my minimal exposure to him, he doesn’t appear to teach “a prosperity gospel that celebrates wealth” but clearly has "moral stances that amount to primitive prejudices.” Definitely not like Apostle Don Stewart (as he calls himself) who will send you a “green prosperity prayer handkerchief.” This is not, of course, an endorsement of Warren. (Can you tell that there is nothing good on late-night TV even with cable?)

Did I finally embed a URL correctly?

Obviously, I still have something to learn about embedding URLs. Here are two URLs related to Rick Warren & Readers Digest.

Should come as no surprise that Rick Warren is featured in the March Reader's Digest. "Pastor Rick Warren has amassed an enormous following of 'new evangelicals.' Now he's trying to change the world."