San Francisco Chronicle on the ropes

On Tuesday I attended a strange event at San Francisco's main library billed as "A Conversation about the Chronicle," put on by the Northern California chapter of the Society of Professional Journalists. Perhaps it would be more accurate to say the event itself wasn't so strange -- but the fact that this adjective comes to mind when I think back over it says something about my relationship to the Chronicle. From the tenor of the discussion, I'm clearly not alone in reacting ambivalently to the newspaper's probable immanent demise. 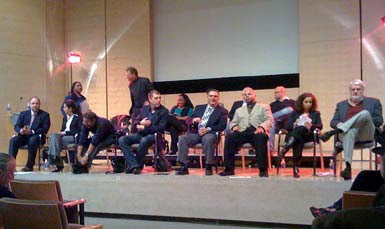 There was an enormous panel -- all folks who in one way or another do or teach journalism. On this occasion, in two hours, many only got to say a few sentences. All were lit for TV broadcast. Rose Aguilar and Hana Baba from KALW moderated the proceedings and concurrent radio broadcast. 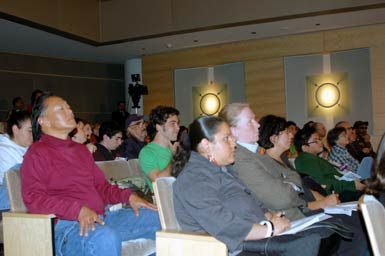 The crowd filled most seats, though not all were not raptly attentive.

So what did the panel have to say about the future of the local newspaper? Neil Henry of the UC Journalism school thinks one thing is clear: people are not now and won't be in the future buying newsprint publications.

Carl Hall from the Chroncle's unit of the California Media Workers Guild -- that is, the guy who has been having to negotiate with the Hearst Corporation -- urged "journalism should fight for itself." He pointed to the example of In Denver Times, a subscription daily put up on the web by former staffers of the now defunct Rocky Mountain News.

Dina Ibrahim, a professor of broadcast arts at SFSU, tried to point out that most people get whatever news they get from television. No one rose to that bait. 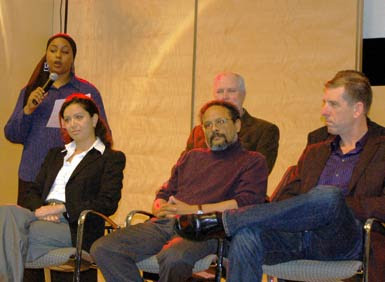 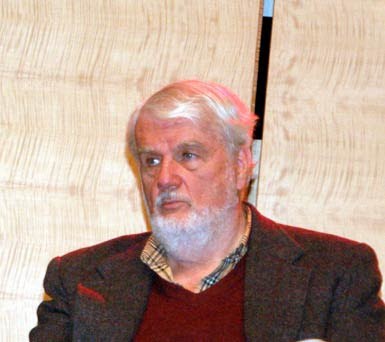 Bruce Brugmann, owner, seer and non-union autocrat of the Bay Guardian, says that he's discovered the delights of blogging. He likes its speed. He also thinks we should fight to save the Chronicle. I didn't get quite why. Fortunately he's got an editorial in his paper here that outlines his opinion. 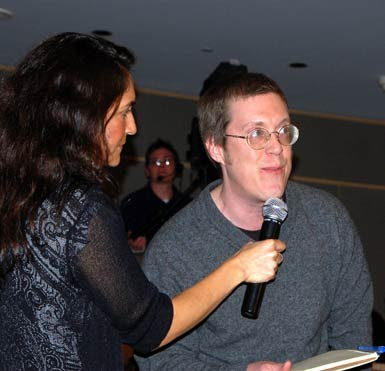 From the audience, a speaker pointed out that many parts of the San Francisco community feel that the Chronicle has left them. Somehow their concerns aren't there, there's "a giant disconnect" from the city as many live in it. He thinks it is an issue of class.

Ricardo Sandoval, assistant city editor of the Sacramento Bee, insisted that there is a market for coverage of the people newspapers usually ignore, for example immigrant communities. After all, for all the "crisis" of newspapers, 50 million people in this country do buy papers, so there's a big market somewhere! He said the Sac Bee is solvent. 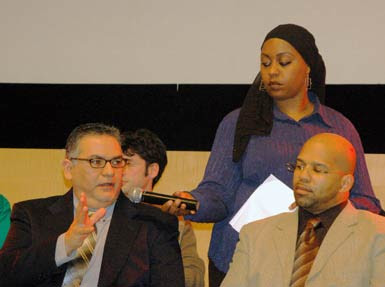 Sandoval, Hana Baba and Martin Reynolds from the Oakland Tribune,

There were hopeful voices. David Weir, who co-founded the Center for Investigative Reporting in 1977, asserted that the newspaper "crisis" is just a small aspect of universal changes now happening, technological, social, and ecological. He has 'no fear for the future of journalism." Representatives of The Public Press and Spot.us confidently believe that new models of news delivery are here.

I don't think anyone on the panel felt they'd exhausted what they had to say. If you are really a glutton for punishment, the Media Workers Guild site has a link to the video of the event.
***
So what to do I think about the Chron's likely demise? Lots of things, no more coherent than this event: Then we'll all figure out how to get whatever news it is we really want. That part, I'm less concerned about.
Posted by janinsanfran at 12:21 AM

Dear Jan: I didn't see you either. How weird. It is fascinating how close our accounts of the same event turned out to be, even down to the photos and the slagging of that old hypocrite Bruce Brugmann. Wish I'd seen you so we could have had a beer together afterwards.

And who wrote the decent coverage in the Chron of Iraq and Afghanistan in the early days? I don't remember what you're writing about, but I do believe you.