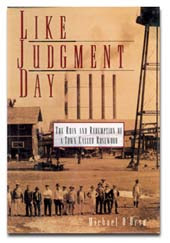 Michael D'Orso's Like Judgment Day: The Ruin and Redemption of a Town called Rosewood is absolutely mesmerizing.

This much is known...

What is known is nowhere near everything. In 1923 a white lynch mob -- ostensibly responding to some kind of insult to a white woman -- attacked, burned and obliterated a Florida town named Rosewood that had been home to several hundred Black residents, laboring people and landowners. Some number of people, perhaps eight, were murdered in the rampage. The survivors hid in the surrounding swamps, then fled the area, never to return.

The book is the story of how this true episode of cruelty and terror seemed to disappear for seventy years, hidden away as much by the terrorized survivors as by perpetrators. Having your home erased without trace and absolutely without recourse does that to people. Some who escaped lapsed into a helplessness that included a feeling of shame. Most of the others found strength in going on; they wanted no part of remembering.

But thanks to some of the children and grandchildren of Rosewood, the story was pulled back into the light -- and in 1994, against very long odds, the penny-pinching, conventionally racist Florida legislature recognized the wrong and voted a little monetary compensation to survivors and descendants. The crime would not stay buried.

It took the cooperation of a lot of people and a lot of fortunate accidents to achieve this improbable victory for truth, even though so long delayed. One grandson dug away at the mystery of what happened for years against the opposition of his survivor mother. The white lobbyist at the fancy law firm that eventually lent a pro-bono attorney to the case happened to come from the small town where many of the survivors ended up -- and knew some of the descendants from childhood, the age at which rural Blacks and whites could mix. Just when it looked like the state might escape culpability, an unimpeachable white witness to the first murder appeared to testify. Michael D'Orso truly is telling a tale stranger than fiction.
***
The story of Rosewood brings to mind so many other places in the world where people struggle against apparent legal impunity enjoyed by criminal abusers: I think of Uruguay, Chile, El Salvador. It's heartening to read about a rare instance where such a story happened within our country and the crime was finally admitted.

Will we someday pry open the truths about the crimes committed by our present rulers in so many lands, but most especially of late in Iraq, Afghanistan, Pakistan? Certainly Rosewood's history says we can never give up trying to win some measure of justice for the victims, however long it takes.

Posted by janinsanfran at 9:26 PM