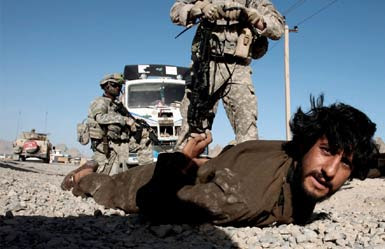 David Milliband is the U.K. Foreign Secretary. That doesn't mean he is not an idiot. Check out his assessment of the state of his country's (and ours) engagement in Afghanistan.

"It is not true that the Taleban are overwhelming our forces because in any conventional encounter they lose."

The same could have been said (and actually was) said about a certain bunch of uncooperative colonials back in the 1775-1783 era.

Imperial occupiers don't win against determined local foes unless they (and their citizens) are willing to murder indiscriminately, pour vast armies into the project, and stay indefinitely. The U.S-U.K. alliance has shown some willingness to do the first, usually from the air. There is no sign that people in either country will indefinitely support a long war of attrition and occupation against people who fight because they have nothing to lose.

The Afghanistan project is FUBAR -- fowled up beyond all recognition. The question is not whether the U.S. will get out -- but when. It's the business of engaged people to hasten that day by educating ourselves about this war and creating political pressure for an end.

Posted by janinsanfran at 10:40 AM

In war everyone is a loser. You are right; this is a war that can't be won. We only have to look at the six abysmal years spent in Iraq, and for what?

David Milliband spelled "Taliban"? As if Britain wasn't in enough of a mess already, I'm so proud we're now represented abroad by a man with the political subtlety of a schoolboy who can't spell a word that must appear before his eyes at least twenty times a day...

Whoops, the first few word got cut off that post, for some reason. It should have read: "Is that how David Milliband spelled "Taliban"?"
Serves me right...

Actually, that's how the BBC spelled "Taleban." Perhaps that is proper Birtish usage? I don't know.